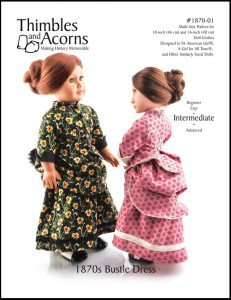 Fashion is where expression meets practicality and lures it into the realm of the extreme. Though fashion trends have a tendency to push the limits, practicality always manages to bring them back into balance… at least for a time. Full skirts were the hallmark of the early Victorian era and by the 1860s they had expanded to as wide as six feet in diameter. However, as railroads began forging paths around the world, women began to travel more and more. Full skirts and crinolines made for poor traveling companions and the boundary for this fashion trend had been reached. Still, it would be a gallant exit. The 1870s saw a great boom in the textile industry. Hand looms were replaced by more efficient steam driven power looms which resulted in a larger supply of cloth and fancy trims at greatly reduced prices. The great cage crinolines were shed and the surplus fabric from the full skirts was draped in elaborately decorated layers and pulled toward the back in large bustles that were reminiscent of those worn a century earlier. The fashionable silhouette had become smaller and more mobile, but what was lost in size was more than made up for with the elaborate trimming which would become the hallmark of the later Victorian Era.

Pair this Dress up with our Waterfall Bustle or Sweet Sashay Overskirt for a whole new look!