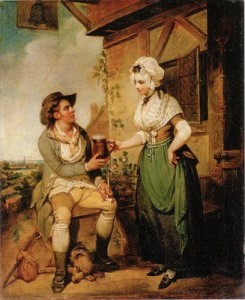 The idea that women played an insignificant role in society before the 19th century is somewhat misleading. Despite their lack of personal rights, access to education, and opportunities outside of the home, most women were able to surmount these obstacles to some degree, contributing to society from behind the scenes. Not only did they take an active role in the livelihood of their families, they had significant influence on their husbands and children. An influence that often reached well beyond their family circle.
Until the Industrial Revolution, running the family home also meant running the family business. Most households not only produced their own food and clothing, but were also the centers of production. Although their chief occupation centered on the needs of their families, women could often be seen working alongside or supporting their husbands in their trade or profession. 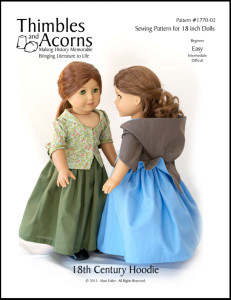 The heavy wide skirted gowns that mark 18th century fashions were not the most practical of clothing, and were not commonly worn by most women. Because of their active roles, women chose simpler garments such as close fitting jackets and loose fitting shortgowns for daily wear. Not only were they less cumbersome, they were more economical as they required less fabric and time to make. The styles of these jackets varied with social status. Working class women and slaves wore plain, simply cut jackets, whereas higher class women chose fancier cuts with embellishments such as cuffs and trims.

Though the vital roles that women played in society were often disregarded, the extent of their contributions under such restraint was profound. The independence fought for and won by the United States awakened a desire for independence around the world. An independence not just for nations, but for individuals as well. By the 19th century, women would no longer be content living in the shadows of men, but would begin the long and arduous struggle to take their God given place at their side.

One thought on “Women in the 18th Century”