Until the early 19th century underpants did not exist as part of a ladies wardrobe, a corset and linen chemise was all the underwear a woman thought necessary, or even desirable.  It wasn’t until the turn of the the turn of the century, when 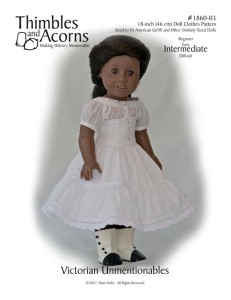 the use of very light fabrics became popular, that women even considered wearing underpants as a necessity for added warmth.  When the crinoline was introduced toward the middle of the century, its tendency to fly up at inopportune moments created yet another need for these undergarments.  Queen Victoria’s stringent standards of propriety established underpants as a  staple article of clothing in every woman’s wardrobe.

Pantalettes, an adaptation of men’s pantaloons, were the earliest style of underpants used by women. They were also called drawers because they were composed of two separate leg sections that were tied on at the waist with drawstrings and acted more as legwarmers than

underpants.  Early on, these were considered a fashion accessory and were decorated with frills and lace and allowed to hang several inches below the hemline.  By the middle of the century, drawers were connected at the waist, though the crotch was still left open.  The loose style of the garment, however, accommodated the opening and afforded a degree of modesty if one lost control of her crinoline. By the 1870’s drawers became an “unmentionable” part of a woman’s wardrobe.  The crotch was sewn shut and it was no longer  appropriate for them to be seen,  so they were shortened to just below the knee.  Despite this, many women still took pains to embellish their drawers with frills and lace much to the chagrin of those who thought it a waste of materials.