Princess Maria Antonia Josepha Johanna was born November 2, 1755 to Francis I and Maria Theresa, Emperor and Empress of Austria. Beautiful and privileged, she lived the life of a fairy tale princess. She enjoyed the pleasures of a close-knit family and many friends of both noble and common birth. Though she had little interest in academic subjects, she did like playing music and dancing as well as more rough and tumble activities such as horseback riding and hunting. Her fairy tale, however, came to an abrupt end when she was not yet 12-years-old. In an effort to unite Austria with France, its long time enemy, her mother began negotiating a marriage between her and Louis XVI, the future king of France. The two were married by proxy in 1768 without having ever met and in 1770, she was sent to France for the formal marriage ceremony. Marie Antoinette, as she would now be called, was 14 and Louis was 15. Austria and France had been enemies for hundreds of years, so it is not surprising that many of the French distrusted the new Austrian princess from the moment she arrived. Despite efforts to prepare her for her new role, she hated the stringent French court etiquette that put her on display and made grand ceremonies out of simple everyday activities. The strict court regulations governing when, how, and in whose company she dressed continually reminded her that she was no longer her own person, but the property of the Crown. In the beginning, she obediently adopted the appropriate “external honors” that marked her as royalty, but once she became queen in 1775, she began rebelling against the the strict court etiquette in an effort to reclaim her individuality. She found her greatest voice in her clothing and hairstyles and for a time brought the opulence and grandeur of court dress to a whole new level. Unfortunately, Marie’s independent spirit drew attention at the wrong time. France was in the midst of an economic crises, and although her spending spree was only a miniscule part of the problem, she received a large portion of the blame.

Shortly after the birth of her first child in 1778, Marie Antoinette retreated to Trianon, a private residence given to her by her husband, where she could raise her children in privacy. At Trianon, there was no ceremony or etiquette, only the quiet company of friends. Everything was to be simpler, including her wardrobe. Her dress designer Rose Bertin, inspired by the muslin dresses worn by the women in the French West Indies, created a loose flowing gown tied at the waist with a large colorful ribbon.  (Speaking of ribbons, I just added some 100% silk ribbons to my Etsy shop!  Leave a comment below about Marie Antoinette to be included in a drawing for a 6 yard sample pack you can use on your own Chemise a la Reine.  I will be giving away a dragonfly blue pack and a pomegranate pack on New Years Eve!)   The new dress played into Marie’s romanticism of the simple life that she longed for and she quickly cast off her her opulent court outfits in favor of the new style. One would think that this simpler dress, representing a more democratic spirit and costing much less than the queen’s previous court wear, would have been celebrated by the people. However, when Elisabeth Vigée-Lebrun painted her in it, the portrait launched a scandal. The dress looked too much like a chemise and the people thought their queen had been painted in her underwear! Despite the public reaction to the queen, the Chemise a la Reine as it had become known, was quickly adopted by the fashionable ladies of France and England and soon became quite popular among women of all social classes. One writer lamented that no one could tell the difference between rich and poor any longer. After being strongly criticized for her excesses in court, Marie Antoinette was again to be found at fault. Now, not only was she accused of lowering the prestige of the monarchy by being too casual, but of trying to put the French silk merchants out of business in favor of her brother’s Belgian and Alsatian weavers. Paying heed to public sentiment, Marie Antoinette began to incorporate more formal attire into her wardrobe again, both to represent herself as queen of France and as a wife and mother. Still, the queen’s perceived faux pas sealed the people’s negative sentiment toward her and fanned the flames of the French Revolution which had been smoldering for some time. 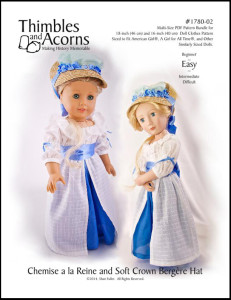 30 thoughts on “The Power of a Little White Dress”