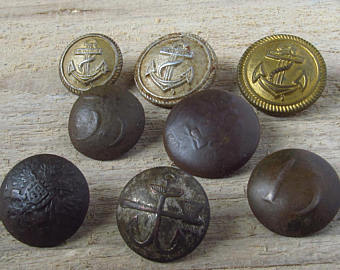 Though buttons can trace their beginnings to the earliest civilizations, pins, belts, and broaches were a more practical fastener for the looser garments of the time so they bedecked clothing simply as ornamental objects. It wasn’t until the 13th century, when someone came up with the idea of the buttonhole, that their true calling was realized. This clever idea for fastening clothing was a boon to the clothing industry and drove the fashions toward of closer fitting garments. Thanks to Crusaders and the encounters they made in their travels, the idea spread quickly throughout Europe paving the way for more and more elaborate clothing styles.

By 1250, the button industry was flourishing and the first button guild was established in France. French kings drove the increasingly skillful guild button makers to new heights of artistry, making France the center of the world’s burgeoning button industry. Inevitably, they became symbols of rank and affluence as well as oppression. Most commoners couldn’t afford the finely-crafted buttons the aristocrats had taken to wearing, and even if they could, royal decree restricted them to plain cloth or thread covered buttons. Buttons continued to be used as decoration as well as fasteners, but their increasing popularity ushered them to a new height of opulence. In 1520, King Francis I of France, bedecked his costume with 13,600 gold buttons to meet King Henry VIII of England, who was similarly clad with buttons. A century later, Louis XIV spent more than 5 million dollars on buttons during his 72 year reign. Not to be outdone by Louis XIV, Charles I of England popularized the use of handkerchiefs decorated with jeweled buttons and coat sleeves adorned with buttons to discourage men from using them as napkins. By the 18th century the button industry had reached its height of opulence and buttons had become a profitable sideline for many artists of the day. Portrait painters painted scenic buttons, potters made ceramic buttons, silversmiths engraved silver buttons, cabinetmakers carved ornate wood buttons, and weavers wove fine silk “passementerie” buttons.

Despite their best efforts, there was no way to limit fancy buttons to the upper class. Though France was unrivalled for artistry in the button industry, England found its niche as well. Inventive in stamping, molding, and casting, English button makers pioneered techniques that allowed mass production of buttons, making them accessible to almost everyone, not just the elite. Americans followed suit and began manufacturing buttons as well. Phineas Pratt of Connecticut turned out Ivory buttons as a sideline to his occupation making piano keys, Paul Revere fashioned fine silver buttons, and Richard Wister promoted his brass buttons with a unique Yankee twist by guaranteeing them for a full seven years!

After the French Revolution had swept away the extravagance of the aristocracy, more practical types of buttons became popular. Buttons became smaller mass-produced works of craft instead of individually crafted works of art. Because France was slow to industrialize,  England quickly became the world’s premier button maker, creating the first real button sensation with the mass production of decorative cloth and glass buttons. With the boon of buttons, young girls began collecting them for “charm strings.” Legend had it that once a girl collected a thousand buttons on her string, Prince Charming would come and claim her for his bride. In 1861, England’s Prince Albert died, and Queen Victoria went into a mourning that would last the rest of her life. When she took to wearing black jet buttons on her sombre black costumes, the world took notice and began imitating her look with black glass buttons, until they became the most widespread buttons of the 19th century.

By the 20th century, buttons were being produced in more varieties than ever before, and being worn by more people. However, with the introduction of cheaper materials, mass produced buttons became rather mundane and the decline of the fancy button was at hand. Men adopted the plain 4-hole button as their standard and women soon followed suit when more tailored clothing became popular due to the influence of military uniforms after World War I. The introduction of the zipper and spin drier made fancy buttons impractical and the popularity of costume jewelry made them unnecessary as wardrobe accents. When the Depression and World War II broke out, the novelty button appeared. Shaped like a fruit, cigarrette packs, and cartoon characters they were a cheap luxury that brightened some otherwise dismal days. During this time, Mrs. Gertrude Patterson talked about her beloved button collection, and inspired people to begin searching attics and old pin boxes for tiny treasures. It was a diversion people could afford.   Buttons, too practical to ever disappear yet too adaptable to stay the same. These miniature canvases pack an extraordinary amount of information about the people who made them, the people who wore them, and the world around them.