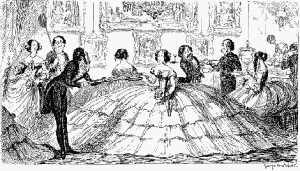 From 1840 to 1860 the focus of the woman’s figure was on her waistline…the smaller, the better. Even Ma Ingalls liked to boast that her husband, Charles, could span her waist with his hands when they were first married. Though most women tightened their corsets just enough to smooth their figures and get the illusion of a small waist, some of the more fashion conscious women tried to achieve what they deemed as the optimal circumference of just 20-inches. Look at a standard 18-inch doll, her waist is about 10 to 12 inches around. That means these women were trying to get their waistlines to just twice the size of a doll’s waistline! Empress Elisabeth of Austria was quite proud of her 20-inch waist, but it came at the price of a severe eating disorder. For most women, such a small waistline wasn’t possible, so fulll, bell shaped skirts came into fashion which helped to create the illusion of a tiny waistline. Until the crinoline was developed in the late 1850s, layers of petticoats – as many as seven at a time – were worn to hold the skirts out. This may not have posed a problem when the weather was cool, but can you imagine what it was like to dress this way when the weather was warm? Remember, there was no air conditioning at this time. By the mid 1860s the bell shaped skirt had expanded to six feet in diameter. 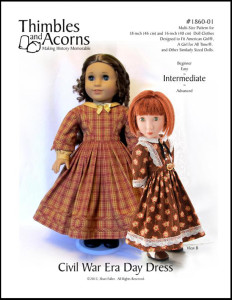