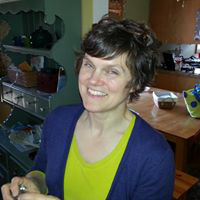 It all began in third grade, when no matter how hard I tried I couldn’t pass my speed drill tests for math facts.  By the end of the year, everyone else in the class was mastering their division facts while I was still struggling through my addition facts.  I was fairly convinced I was a math dunce and the mortification I felt grew exponentially each time I failed one of those tests.  As a result, I grew to despise math immensely.  It was during this time that we lived with my grandparents for a few months while our house was being built.  Grandma took me under her wing and began teaching me how to sew.  I spent many evenings and weekends sewing with grandma and she patiently taught me how to piece together rag dolls and doll clothes. While I sewed, I left my math problems behind… or so I thought.   I was fascinated by the odd shaped pieces that magically came together to form legs, hands, faces, and sleeves.   Though I didn’t realize it at the time,  I was developing a key skill called spatial reasoning.  With no numbers to jumble, my math skills began to grow without my being aware of it.  It was when I took my first Geometry class years later that the shapes I had become so familiar with began to come together with the numbers that had confounded me for so long.  Those numbers at last began to make sense and and for the first time, I excelled in math.

Throughout my school years, I had teachers that I respected, a family that encouraged me, and the ability to learn… what was it that kept me from mastering my basic math facts?  This question came up again when I began homeschooling our three oldest children and I found that each of them struggled to learn in one area or another.  In an effort to help them avoid the same discouragement that I had faced, I began reading everything I could get my hands on about the way we learn.  Some studies differentiated our way of thinking into two main categories, right-brain and left-brain – right-brained thinkers being more creative and left-brained thinkers being more analytical.  Other studies took this concept further and were able to separate our learning styles into three categories – visual, auditory, and kinesthetic.  More studies used this concept to discover nine different kinds of  intelligence – naturalistic, musical, logical-mathematical, existential, interpersonal, kinesthetic, linguistic, intra-personal, and spatial.  It is a fascinating subject to say the least, but every study brings to light once core conclusion… we all learn differently.

The difficult thing about a classroom environment, is that its basic structure caters to left-brained, logical thinkers… leaving us right brained, visual types to muddle through the best we can,  enjoying our momentary bright spots in Home Economics, Art, Music, and Shop (or as they are called today Consumer Science, Applied Arts, and Industrial Technology… the left-brained educational administration just can’t resist tampering with our right-brained class syllabuses).  Sewing opened the doors for me to appreciate and even master many academic subjects.   Aside from utilizing basic maths skill for calculating the length of a piece of trim, determining the number of pleats, or estimating the amount of fabric needed for a project, we are also using a more intuitive form a math called spatial reasoning when we visualize how all those odd shaped two dimensional pieces will come together.  These skills go well beyond developing our sewing expertise as they are the same skills needed for chemistry, engineering, and rocket science… yes, I just compared sewing with rocket science!   On the creative side, sewing allows us to explore history and literature through hands on experience.  Recreating or designing a piece of clothing helps us to connect more closely with the past or visualize a character.   Sewing also encourages us to mend and create new items from cast-off materials.  This not only helps to reduce waste, and save money, but it also helps us to look at things differently, think outside of the box so to speak, and develop our problem solving skills – skills that can be utilized in every area of our lives.  It is this same kind of problem solving that put man on the moon…. again, I am putting sewing in the same category as rocket science!   Sewing is something that interests both right-brained and the left-brained types of people.  While the engineering and mathematics of sewing will attract left-brained thinkers, the intuitive and creative parts will attract the left-brained thinkers.  The biggest benefit to this is that sewing challenges both types of people to sharpen their non-dominant learning styles.  Just like exercising and eating right, is good for our bodies, getting out of our comfort zone intellectually can strengthen and develop us mentally.  I am forever grateful for my grandma taking the time to teach me to sew.  Though she probably only saw her efforts as a nice way to spend time with her granddaughter, without realizing it, her simple gift unlocked the doors that my teachers couldn’t.

To help sharpen your maths skills, here is a special 25% off coupon just for you to use at our Thimbles and Acorns Etsy Shop from now until September 30th, 2014 … just type SewSmart where it asks for a coupon code when you check out!