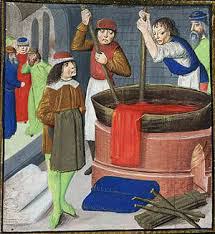 Red, a powerful and attention getting color that exudes feelings of authority, passion, and life, has always been held up as a color of particular distinction.  Throughout the world, royalty favored it as a mark of power and wealth, soldiers wore it as an emblem of strength, and religious orders used it as a symbol of authority.  After the fall of the Western Roman Empire in the 5th century A.D., European princes and the Roman Catholic Church adopted the use of red as a symbol of majesty and authority.  Charlemagne wore red shoes at his coronation and then 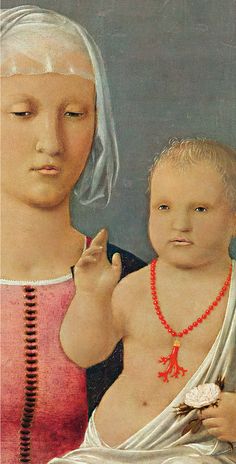 painted his palace red as symbols of his royal authority and Catholic cardinals started to wear red colored frocks and Christian paintings began depicting Mary and Christ in red clothing as symbols of their spiritual authority.  The symbolism became so strong that many myths and superstitions grew up around it.  People believed that that red objects conveyed health through their color alone. The more well-to-do wore red precious gems such as garnets and rubies to ward off diseases.  Children in Europe wore red coral jewelry while children in China wore a piece of red clothing as a kind of talisman to protect them from disease.
From the earliest times, cloth could be dyed certain shades of red with varying results.  Most people simply boiled their cloth in beet juice, but this didn’t produce a true red and the color was prone to fading.  Rich colorfast dyes extracted from the Madder plant were first used by the Ancient Egyptians but were among the most difficult and expensive hues to produce.  The production of Madder red was mastered by the Turks who produced a bright and rich red that became known as “Turkey Red”.  The closely guarded intricate process took months to complete, making the dye very expensive.  During an expedition to Mexico in 1518, the Spanish learned of a red dye made from a native insect called a cochineal that the Aztecs and Mayans had used for centuries.  Cochineal produced the most intense and stunning red that Europe had ever seen and it quickly became one of the most valued commodities from the New World, second only to silver.  Production of this red dye grew rapidly and for the first time, bright scarlet red cloth became accessible to the lower classes. 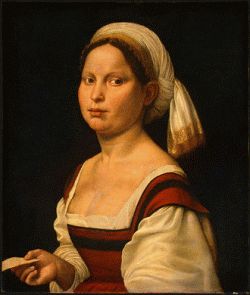 During the Renaissance, red became the most popular color for garments. In fact, kirtles were most commonly made in red because the color was believed to have warming properties. People prone to chill were advised to wrap themselves in red garments and to line their shoes with red fabric to help them stay warmer. By the end of the Renaissance many of the superstitious beliefs associated with the color red had begun to give way to more symbolic meanings that included life, health, vigor, war, courage, anger, love and religious fervor.