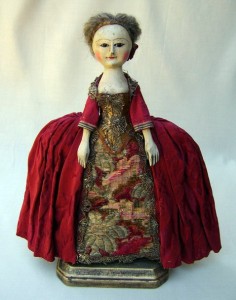 In 1760, Marie Antoinette’s sister painted a delightful portrait of her Imperial family celebrating the Feast of St. Nicholas where we see 8-year-old Marie standing behind her mother, Empress Marie Therese, excitedly holding up a French fashion doll. By this time, France had established itself as the unrivaled fashion center of the world and fashion dolls, dressed in exquisitely made miniature versions of the latest styles, had become one of its chief exports. Though the purpose of these dolls was to provide detailed models for dressmakers and not as playthings, their dainty features and miniature wardrobes couldn’t help but captivate the hearts and imaginations of the little girls who were lucky enough to get their hands on one. Fashion trends had become such an important means of social and political expression that these dolls were granted diplomatic immunity, and even during times of war, they were declared exempt from embargoes on enemy imports and often given cavalry escorts to their destinations. Marie Antoinette was born destined to marry Louis XVI, so her childhood was spent grooming her appearance and manners to suit the high standards of the French court. The Austrian court of Marie Therese didn’t care much for fashion, but as part of her preparation, the empress regularly ordered French fashion dolls from Paris to keep young Marie Antoinette dressed in the latest French styles. In so doing, the empress may not have realized that the avant-garde fashions from Paris were vastly different from the fashions worn at the palace of Versailles that followed strict rules of court etiquette. Free spirited Marie loved her dolls and developed a strong taste for Parisian fashion that would eventually lead to her undoing. When Marie turned 13, the final arrangements for her marriage to Louis XVI were made and Hofburg palace was filled to the brim with fashion dolls to help her pick out her wedding trousseau. Dressed in an array of the latest Parisian ball gowns, afternoon dresses, robes, and petticoats in delicate colors, embroidered with floral designs or silk ribbon applique, trimmed with serpentine garlands of silver and gold lace, artificial flowers, feathers, tassels, and silk ribbon bows, one can only imagine the pleasure she must have found amongst all those beautiful dolls! Shortly after arriving in Versailles, Marie was introduced to Rose Bertin, an accomplished milliner and dressmaker. Marie had developed an insatiable appetite for a fine wardrobe and was passionate about each and every detail. Throughout her reign, she and Rose met twice a week to work on designs for new gowns, and together they redefined French fashion and firmly established the worldwide reputation of French couture. To display her latest designs, Rose had special fashion dolls made of wax over jointed wood armatures that she called “Pandoras.” Eager to share the designs for her specially-crafted gowns, Marie had many of these dolls sent as gifts to her sisters and her mother.  I’m feeling a little eager to share today as well… if you like the dress featured on our Marie Antoinette Zone-Front Gown cover, we have a limited number of kits available in our Etsy Shop.  Leave a comment below by November 23rd to be entered in a drawing for one of them.  I will announce the winner on Facebook on November 24th! 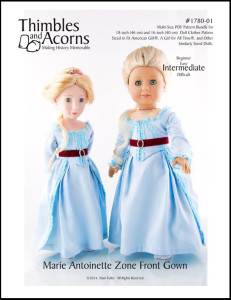