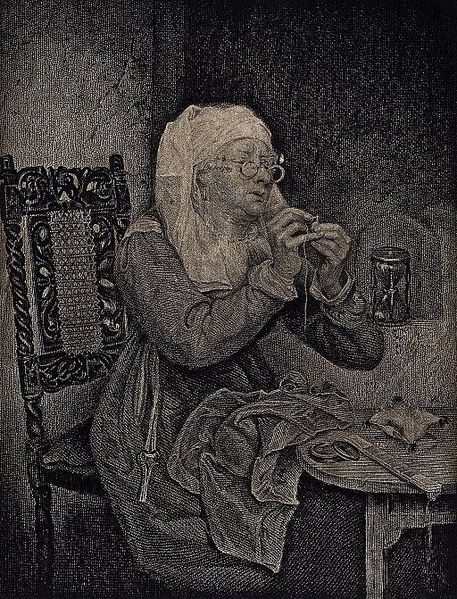 For the last six weeks, I have been teaching a young group of girls the basics of handsewing. Though it takes a lot more time than sewing by machine, it is something I enjoy because it helps me to slow down so I can get lost in my thoughts. Lately, as I have been showing my girls how to manipulate their needle to form neat rows of stitching, my thoughts have turned to the needle itself. Because of the simplicity of its design, we take for granted the skill and ingenuity needed to create this delicate masterpiece.

The sewing needle is a very simple tool indeed; a long slender shaft with a sharp pointed tip at one end and a small hole called and “eye” at the other end. Sewing needles date back to the earliest of civilizations and were first made from bones, antlers, ivory, porcupine quills, and thorns. It is hard to imagine sewing a fine seam with any of these needles, which is just is well, because these early needles were only used to piece animal skins together. The goal was more practical than fashionable, and when cloth first came into use, people probably gave a heavy sigh of relief as they set aside their bone needles and wrapped themselves in whole pieces of cloth.

As people began migrating throughout the world, however, whole cloth garments became impractical in different climates. In Egypt, they were too heavy and cumbersome in the heat of the desert sun, and further north, close fitting clothes helped retain a body heat. Cloth needed a finer needle to sew with and before long needles made from metal made their first appearance. Ancient Egyptians used copper, silver, and bronze to make needles of various lengths, but it is believed that the Chinese were the first to perfect the art of manufacturing a steel needle, though some researchers trace its origins to India. Between 750 and 1250 AD, Arab merchants began importing an iron alloy that was similar to steel and at their famous centers for weapons manufacture in Damascus and Toledo, where they specialized in making swords, they perfected the art of making needles. This may seem like a strange place for a sewing needle, but the Arabs had become renowned for their medical knowledge and sought to perfect needle manufacture for surgical purposes. 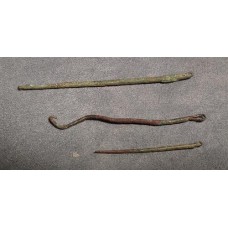 Arabs brought the art of needle making to Spain during the Muslim conquests where they perfected their manufacture by the 11th century. When the Muslims were driven out of Spain in the 15th century, they took the knowledge of needle making back with them to the Arab countries where they held a monopoly on the manufacture and trade of fine sewing needles in Europe and Western Asia. To meet local demand, European blacksmiths made needles from iron sheet, cut into lengths, which was then hammered and rolled into the thickness required. The points were filed by hand and the eye created by first flattening the head and then punching a hole through it. The time consuming process produced a rather crude needle. Needles, especially those imported from Arabia, were expensive. They were considered valuables and women protected them in special cases that they attached to their belts. 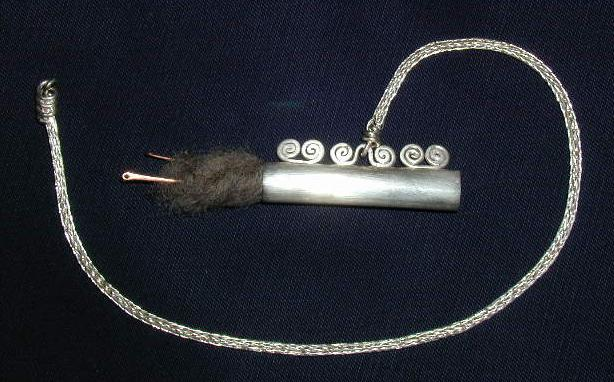 In 1650, Arabs brought the manufacture of needles to Europe and Western Asia and England quickly became a leader in the trade. Steel was heated, shaped into a cylinder, and drawn through a number of dies to achieve the proper gauge wire. Then, the wire was cut into needle lengths, the end was hammered flat, the wire heated, and an eye punched and grooved for easier threading. The eye was filed smooth and the other end was filed to a sharp point, sharpened by filing. The needles were then tempered by heating, cooling, and then straightened with a hammer and anvil. The needles were then polished in a bag filled with emery dust and olive oil that was moved back and forth between planks under a heavy weight for as long as two days. Finally, they were washed with hot water and soap, dried in a bran-filled box, and then sorted and repointed manually with an emery stone. During the eighteenth century, workshops grew as the operations were divided among workers of different skills and craftsmanship reached an all-time peak in supplying needles for the finest embroidery and other luxury work. In 1850 needle making machines were introduced with a capacity to produce needles in thousands to meet the increasing local and global demand in the world market. By 1866 England was manufacturing 100 million needles in a single year. The town of Redditch in Central England became the center of the world’s needle production in the 19th Century and with its access to the British colonies had a virtual monopoly on the needle production.

Early in the Industrial Revolutions, needle workers had many casualties. In the final stage, a pointer held up to 100 needles at a time against a grindstone and could finish as many as 10,000 an hour. If a grindstone broke and flew apart, it could be fatal. The most serious threat, however, was the inhalation of tiny particles of stone and metal, which caused a disease called Pointer’s Rot, an occupational pulmonary disease. The life expectancy of a needleworker was under thirty-five years.

The nineteenth century was the golden age of needle production. Higher disposable incomes, the new profusion of textiles, the introduction of the sewing machine, and the growth of rise of world trade expanded markets. Before, it used to be that a nation purchased three to four hand-sewing needles per year per household. By 1906, the annual production of needles was 3 million per day worldwide and they were now cheap enough to be lost in great numbers. Most hand-sewing needles sold in the United States were made in Britain and Americans never attempted to challenge British dominance of needle making.