Skip to content
Home » About Us » Little Trip on the Prairie

Sewing historical clothing for dolls is a form of time travel for me… well, that and reading a good book!  Still, nothing beats a road trip to really take you back.  This year Tom, my genealogy-nut husband, and I decided to head over to South Dakota to investigate some of our family’s roots.  Looking at the road map, I noticed that his great-great grandparents, George and Amanda Orrock, had settled in what was then the Dakota Territory, just 80 miles north of Laura Ingalls Wilder’s homestead in De Smet, South Dakota.  Knowing how much it would mean to me to see this homestead of my childhood hero, Tom quickly decided to indulge me and added it to our itinerary.  It wasn’t until we began doing some research, however, that we realized how closely George and Amanda’s lives paralleled the lives of the Ingalls.

Married in 1871, George and Amanda began their life together near their extended families in Sherburne County, in the heart of Minnesota.  This was a particularly difficult time for farmers in the Midwest.  Post-war inflation, rampant speculative railroad investments, and successive crop failures brought on by drought and grasshopper plagues were all contributing factors to the Panic of 1873 that ushered in a worldwide depression.  Charles Ingalls was all too familiar with the hardship brought on by this depression.  He had lost his farm in Walnut Grove after the grasshopper plagues devastated crops in the area between 1873 and 1877.  Although the Orrock’s area was spared the grasshoppers, George and Amanda couldn’t escape the depression. George was a farmer, and coming up with the hard cash to purchase a farm would have been especially difficult for a young couple just starting out.  By 1878, however, things began looking brighter; the grasshoppers were gone, the drought had passed, and the railroad companies began making their way west once again.  The success of the railroads, however, was dependent on enticing homesteaders to follow them, and so began a campaign offering free land and inexpensive travel to all those willing to go. 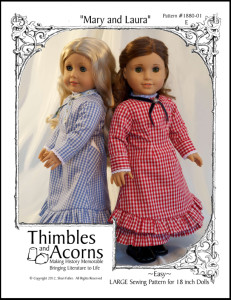 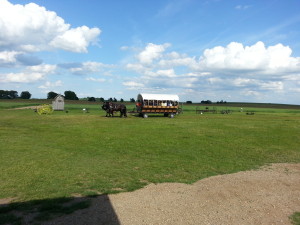 A view of the Ingalls Homestead.

The lure of free land was an opportunity that neither Charles Ingalls nor George Orrock could dismiss. In 1879, Charles took a job with the Northern Pacific Railroad to fund his move to De Smet.  Although the homestead offices would not be opened until the following year, Charles was able to scope out his choice of land and be among the first to file a claim in 1880. That same year, George and Amanda packed up their four young children and made their way to Grant County in the Dakota Territory, more than likely following the “Milwaukee Road”, a stretch of railroad built by the  Chicago, Milwaukee, St. Paul and Pacific Railroad that ran close to their home.  Although the land itself was free, it was by no means without cost or risk.  Desperate for land, it was easy to forget the natives who had been driven off to open it up to homesteaders.  Then, to keep the land, a homesteader had just five years to tame the unpredictable wild prairies; failure to do so meant their farm would be forfeit and all their hard work lost.  Still, it was a risk that many farmers were more than willing to take.

Trains were literally buried throughout the Midwest during the winter of 1880-1881.

A typical claim shanty. Not much more than a shed and certainly not made for South Dakota winters.

Mary, Laura, and Carrie Ingalls about the time of “The Long Winter”.

Towns quickly sprang up in De Smet and Grant County over the summer of 1880.  As this was the first year for many of the new homesteaders, most of their efforts were put into building flimsy claim shanties and breaking the tough sod to prepare it for the next year’s crops.  Because the first harvests were small, they were depending on the railroads to bring in the needed supplies to get them through the winter.  But this first year was going to be a trial by fire for these new homesteaders, or perhaps more appropriately, a trial by ice because winter arrived in full force on October 15 ahead of the supply trains, dumping several feet of snow over the entire Midwest.  The trains were stopped and the homesteaders were stranded ill-prepared for the Long Winter that lay ahead.  Storm after storm continued to pelt the prairie, burying the trains until spring, leaving the industrious and innovative settlers to find ways to make it through the winter on their own.  Seed grain that had been meant to sow their fields the next year was ground in coffee grinders for food, hay was twisted into large knots to burn in place of coal, and families sheltered together to save on fuel and combine their resources.  This winter was a test of the resilience of the pioneer spirit in each of the homesteaders, and many ended up giving up their claims and moving on.  But the pioneer spirit proved strong in both Charles Ingalls and George Orrock who stuck it out, eventually proving their claims. 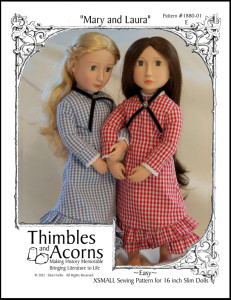 This pattern also available for A Girl for All Time dolls.