Skip to content
Home » Historical Tidbits » 0000 Ancient Times » Judging a Cloth by its Color… What Fabric Tells Us, part 2

Color is anything but passive  and from the time the first dyes appeared, artisans found ways to use color to create interesting designs and patterns on fabrics.  At first, multiple colors were woven into fabrics to form simple stripes and plaids,

but over the years, weavers developed increasingly complex patterns which were mastered in the Middle Ages by the Byzantines in their beautifully intricate brocade fabrics.  Brocades quickly became a highly prized luxury fabrics worn by nobility throughout Byzantium, Greece, China, Japan, and Korea and were only available to the wealthiest of people as the Byzantine Emperor charged exorbitant prices for them.

Printed fabrics first emerged during the second millenium B.C. in India where artisans had gained a reputation for their expertise in handling dyes and talent for creating beautiful designs on cotton their cotton cloth. 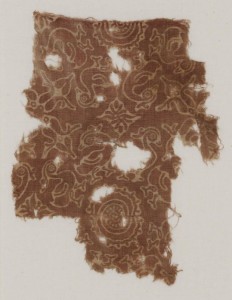 Indian Printed Cotton from the 1400s prior to European influence.

For generations Indian craftspeople handed down their secrets of the long and complicated processes using mordents, or metallic salts to fix dyes to the fabric which gave their fabrics an unmatched brightness and colorfastness. 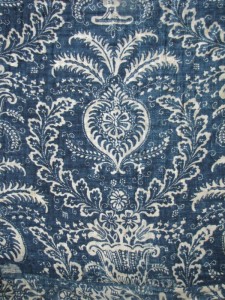 When Portuguese merchants began importing Indian cottons in the 17th century, the lightness of the cloth and lively stylized patterns quickly seduced Europeans who were hungry for an alternative to the heavy silks and woolens, or the rough linens of the times. With their success, the merchant traders of the “East India Company” flourished. 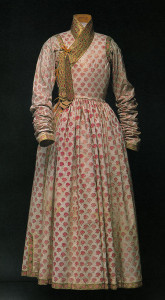 Indienne, Wood block printing from a Factory in Mulhouse, Alsace, around 1760

geometrical vegetation created elegant and ornamental botanical designs.  European engravings circulated all over the world to be used as models. Soon, the East India Company was unable to meet the European demand. The obvious solution was to start reproducing the printed cloth in Europe and in 1640, Armenian merchants, armed with the secrets of the Indian techniques, introduced Textile Printing to Europe.The French Port of Marseille was the starting point for European Printing and the phenomenal success of the first Textile Print works began to seriously threaten  the well established wool and silk manufacturers who objected strongly to this unexpected rivalry from the Indian continent.  The revenue from the exportation of woolen and silk cloth was considerable so France passed legislation against the importation, manufacture, and usage of any Indian Calico Printed in 1686 and England followed suit in 1700.

The Dutch had no prohibitions when it came to the the textile trade and continued to import and produce Indian calico prints, and in spite of the heavy penalties which included imprisonment and banishment, the fashion for Indian calico prints continued to grow, especially in the American colonies where the importation of the fabric remained legal. Faced with such a strong resistance, prohibition was gradually relaxed, and in 1759, textile printing based on the Indian techniques was proclaimed legal in France. England, Holland and Switzerland soon followed the French lead, and the European textile printing industry was launched.

Until the mid-18th century, printing fabrics was a time consuming process that required the preparation of separate blocks to print each color on the designated areas with more detailed areas of colors having to be hand-painted onto the 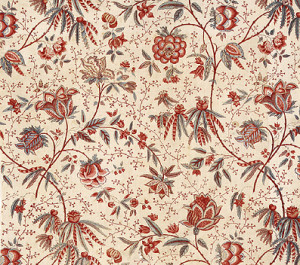 Indienne, Wood block printing on cotton, from a factory Oberkampf in Jouy, 1785

textiles.  Designs were limited, with many motifs being copied directly from original Indian designs.  Most of the designs were floral and flower painters were commissioned by manufacturers to produce intricate designs, adapting their art to the demands of this new and exciting industry. A method of printing fabric with engraved copper plates was developed in Ireland in 1752 and later brought to England. Prints from copperplates produced designs with finer details that were of almost equal to the quality of a print on paper, but they were limited to one color so woodblocks and 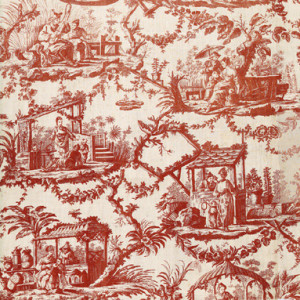 hand-painting were still used to add colors to copperplate prints.  The fine detail that was possible from the engraved copperplates inspired the  famous landscapes with allegorical, literary, and historical references best known as “Toiles de Jouy”, but these were almost exclusively used for interior decorating purposes.  As printed fabrics became more and more affordable, the market for printed fabrics continued to grow.  Printed fabric designs began imitating fashionable silk brocades incorporating European flowers such as tulips, carnations, roses, and daisies blended with traditional  Indian motifs and most often printed on a white background.

The greatest advancement in printed fabrics came in 1785, when Thomas Bell patented the first roller printer.  Not only could manufacturers print larger quantities of

Printed Cotton from about 1800.

fabric, but they could also print up to six colors at a time on a series of engraved copper cylinders. The production of printed cotton increased dramatically as colorful printed fabrics became inexpensive and popular for working class clothing.  Print designs became more detailed and by the 1790s, small floral “sprig” designs with tiny motifs on colored backgrounds grew to be popular.

Punch cards in use on a Jacquard loom at the Museum of Science and Industry, Manchester, England

While printed cotton fabrics took the world by storm in the 18th century, brocaded fabrics remained quietly in their gilded background until 1801. when the  Joseph Marie Jacquard patented a brand new invention – a loom which operated with a carefully coded series of punch cards.  The holes in each card represented one line of a pattern.  Different colored threads passed through the hole, creating the pattern.   The Jacquard loom  revolutionized the production of the elaborately patterned brocade fabrics.  However, the soft and lightweight printed cottons had all but extinguished the fashion for clothing made with stiff and heavy fabrics, so by this time brocades were relegated to interior design.  On an interesting note, if punch cards with holes arranged in a specific order designed to create a pattern sounds a little like an early computer – it is.  The Jacquard loom and its punch card pattern system laid the foundation for the development of the first computers…  I’m telling you, people who work with fabric are smart!

In less than 50 years, textile printing and other textile industries were radically changed. Production, distribution, and workers hours were reorganized to suit the Machine and increase profits.  The development of new technology and the harnessing of powerful sources of energy combined to bring calico printing into the era of the Industrial Revolution – beautiful fabrics now flooded the market, but as with any Revolution, it would come at a cost.

5 thoughts on “Judging a Cloth by its Color… What Fabric Tells Us, part 2”