As the world  entered the 19th century, the Industrial Revolution went into full swing and with it the new branch of science called chemistry.  As early chemists began isolating and identifying elements they were able figure out ways to reproduce natural dyes from other other sources.  These discoveries would take the dye industry on an unexpected turn.

In 1775, a young chemist named Carle Wilhelm Scheele produced the first synthetic dye when he discovered that a

Emerald green turned out to be highly toxic, a single dress could contain enough arsenic to kill several people!

compound he had made from copper and arsenic made a beautiful bright green color that was exceptionally colorfast on fabric.  Until his discovery, green dyes were difficult to make and weren’t particularly colorfast.  Scheele’s green was an instant success that enchanted  fashion designers whose color palettes quickly began centering on this new and exciting color.  In 1814 , chemists developed an even brighter and more popular emerald green dye from arsenic and verdigris.  Emerald green fquickly became the epitome of fashion!  Every fashionable home had at least one green room bedecked in green wallpaper, green curtains, and green upholstery.  The 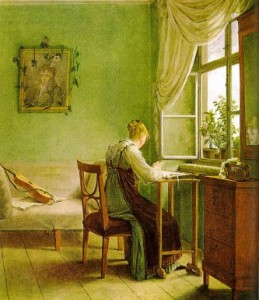 most fashionable ladies became the center of attention in their stunning emerald green silk dresses.  Confection makers added green dye to their candies and other sweets to make them more tantalizing.  Green was everywhere!  Did you, by chance, notice that the common ingredient found in both of these dyes was arsenic?  Remember, at this point in time chemistry was a new science and the toxicity of  arsenic was not fully understood.   As you might imagine, it didn’t take long before it became evident that these dyes were extremely toxic.  People wasted away in their beautiful green rooms, ladies developed serious skin conditions and other ailments from their green dresses, and children died from green sweets given to them by doting parents.  Most alarmingly, factory workers developed horrible skin conditions and illnesses that resulted in numerous deaths.  Despite warnings, however, emerald green had become the most fashionable color of the time and despite the countless people that were falling ill or dying from it, businesses didn’t want to give up the revenue it generated and customers didn’t want to fall out of fashion. 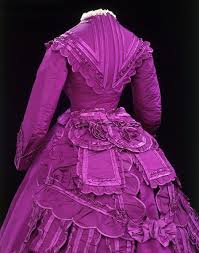 The introduction of “Mauvine” whet peoples appetite for all things bright and beautiful!

Emerald green was just the first color to be created in the laboratories of these early chemists.  The coal powered factories of the Industrial Revolution created a lot of black coal tar waste that no one knew what to do with.  It was polluting the rivers it was dumped into and turning the fields it was buried under in to wastelands.  In 1856, 18-year-old college student William Perkin was experimenting with coal tar hoping to discover a synthetic form of quinine, the only known cure malaria at the time.  English soldiers stationed in India were dying in droves from malaria and the natural quinine that came from the bark of the cinchona tree in South America was in short supply.  During one of his experiments, Perkins noticed that his mixture of coal tar turned a rich purple color – a color similar to the Tyrian purple that was worth more than its weight in gold.  When he found that fabric dyed with this mixture didn’t run or fade, he knew he had stumbled upon a most valuable discovery.  Perkin’s called his purple dye “mauve” and  when it became a favorite color of Queen Victoria, the trendsetter of the Victorian Era, it became an instant sensation.  Perkin’s discovery opened the door to the potential of synthetic dyes, and by the end of the 19th century coal tar, once a useless and filthy byproduct of the industrial age, became the main source for an array of beautiful synthetic colors that put the natural dye industry out of business almost overnight.

The Victorian Era is known for its swooning ladies, chronic illness, and hazardous working environments.  Mauve was revolutionary in bringing a whole new range of bright and vibrant colors to the world, but like its green predecessors, it was unfortunately incredibly toxic, being made with arsenic, picric acid, and other harmful chemicals.  Factory workers, dyers, and 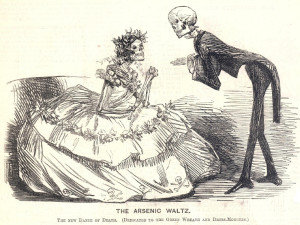 artisans that produced arsenic-infused items frequently suffered from arsenic poisoning.  Painters such as Van Gogh, Cezanne suffered as well.  A report done in the 1890s revealed that about 20% of dress goods (fabrics for clothing) contained more than 3mg of arsenic per meter.  Figuring that an average dress at the time used 7 yards of fabric, the average daily dose received from the most poisonous of dresses  which turned out to be a red and black, was 21mg, 1/5th of the lethal dose.  As hazardous working conditions became more apparent it became increasingly difficult to ignore the dangers of arsenic based dyes.  By the end of the 19th century, improved methods in chemical research and development, and stricter regulations in the workplace  made dyes safer.  It is interesting to note that even in the 20th century, Scheele’s green was still being sold –  though it was no longer sold as a dye, but as a highly effective rat poison.

Happy Belated Saint Patrick’s Day everyone!  I had this article written for last month, but forgot to link it to the newsletter.  Leave a comment below to get entered in a random drawing for a one yard piece of “Poison Green” fabric,  a 19th century reproduction from Andover Fabrics.  This is a high quality quilt fabric and just perfect to for making a most fashionable dress from one of our 19th century patterns.   I will be drawing one winner today for last month and another winner who will be announced in next months newsletter.