While the Sumerian, Indus Valley, Egyptian, and Minoan civilizations maintained close connections with each other trading goods, knowledge, and ideas, the Chinese civilization, was emerging in relative obscurity along the Yellow River.  Although more than 4,000 miles of harsh terrain, rugged mountains, and hot deserts separated ancient China from the rest of the ancient world, that didn’t mean they were completely isolated. From time to time, Chinese merchants managed to make their way to Indus Valley and Sumeria along trade routes bearing goods such as sugar, salt, tea, porcelain, and silk.  The trade routes eventually became known as the Silk Road, a name that is somewhat misleading because the Silk Road was comprised of a vast network of treacherous roads that were anything but silky. The name, instead, was given in honor to their most illustrious export, silk.  Although China maintained trade relations with Sumeria and Indus Valley, they preferred to keep to themselves, living in relative obscurity.  Over time, fewer and fewer Chinese people made their way all the way to Indus Valley or Sumeria, instead handing their goods off to merchants along the way. To the rest of the world, the Chinese people and their alluring silk cloth became the stuff of legends and enchanting stories. 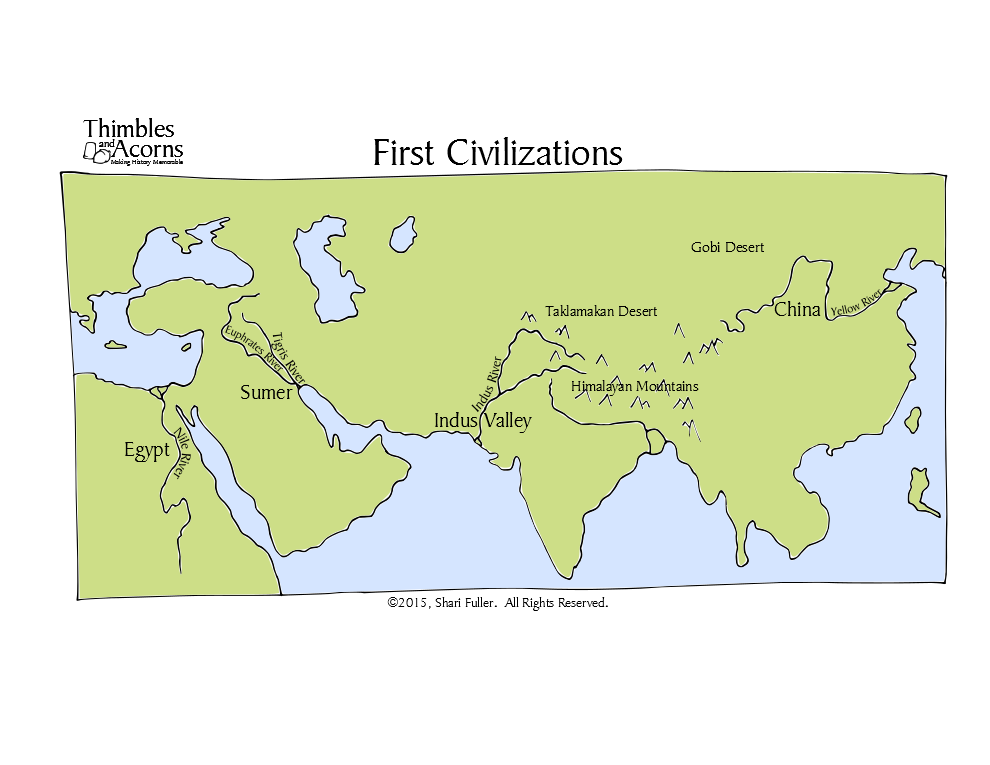 At about the time that the first people of India were making their way to the Indus River and the first Egyptians were making their way to the Nile River, the first people of China were making their way across Asia where they eventually settled along the Yellow River.  According to tradition, Chinese civilization began as a result of innovations introduced by cultural heroes. Fuxi the Ox Tamer and Shengnong the Divine Farmer taught people agriculture and how to domesticate animals and established the first markets for trading.  As their small villages and farming communities grew, a period of chaos ensued until Huangdi, the Yellow Emperor, stepped up as China’s first sovereign in the Xia Dynasty and organized the scattered communities into one large civilization.  People began to live in wooden houses, built walled towns, travelled in boats and carts and made pottery. His ministers taught the art of divination by the Sun, Moon, and stars, invented musical notations, arithmetic, established the Chinese calendar and character writing.  The most notable achievement of Huangdi’s reign, however, was that credited to his young wife Leizu.

The Empress of the Silkworm

Long long ago, in the obscure and mysterious past, while the Egyptians were building the Great Pyramids of Giza, and God was leading Abraham out of Ur into the Promised Land, a fourteen-year-old girl made made a wonderful discovery that would set the course of China’s magnificent history. Her name was Leizu, and she was the young wife of the Huangdi, the Yellow Emperor of China.

Huangdi had planted a beautiful garden that had a large grove of mulberry trees. Leizu loved walking through the garden and in the heat of the day she would retreat to the mulberry grove where the leafy trees cast large patches of shade on the ground. One day, as she walked toward one of her favorite trees, she found that there was hardly any shade at all. When she examined the tree, she found that all the leaves had been eaten so full of holes that they looked like mere skeletons, but she couldn’t see what had caused the damage. Leizu walked to another tree, sat down in the shade, and thought about the problem. The next day she found that the leaves of that tree had been eaten away as well. That evening, Leizu spoke to her husband about the mysterious creature that was eating the mulberry leaves. Huangdi loved his garden and was very concerned about his mulberry trees, so he went with Leizu the next day to see for himself. This time, the found that the leaves were teeming with tiny worms that were hungrily eating away the leaves. Not knowing what to do about the problem, Leizu began watching the tiny little creatures as they ate the mulberry leaves and grew and grew until they were big and fat. After three weeks, they suddenly stopped eating and began to spin a fine silky thread that they wrapped around their bodies until they were completely enclosed in a soft white cocoon.

Leizu was captivated by the silky threads the worms had spun and one day while she was walking with her husband among the mulberry trees she said, “I believe I could find a way to weave those threads into cloth.”

But how could you unwind the threads?” he asked. 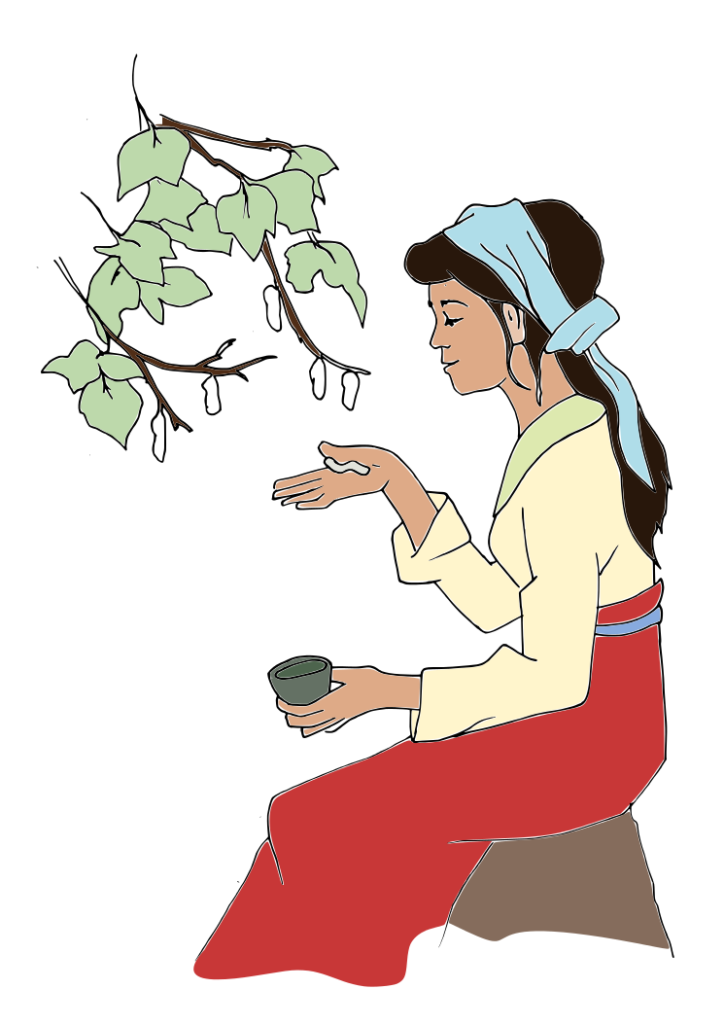 Leizu and the Silk Worms, By Shari Fuller, 2015

The fine threads of the cocoons were stuck together, and no matter how carefully Leizu worked, she could only unwind them a little bit before the fragile threads broke in her gentle fingers. Determined to find a way, Leizu spent the next several weeks tried many different ways to loosen the threads with no success. Perplexed, she took a cup of her favorite tea to the garden to think about the problem. By this time, it was hard to find a tree with enough leaves to cast even a little shade and when she finally found a place to sit down with her tea – Plop! – A cocoon fell from the tree into her cup. As she fished it out, she noticed something strange begin to happen. The outside of the cocoon had softened and Leizu saw a loose thread. Gingerly, she began winding the thread around her finger and to her delight, the delicate thread remained intact.

The fine silky threads from the cocoons were unlike fibers that anyone had ever used before. The fine strands sparkled and shimmered in the sunlight. Individually, they were very fragile, but when several strands were spun together they became surprisingly strong. Even with several strands spun together, however, the thread was too fine to be used with any existing looms, so Leizu had to create a special loom before she could weave her new thread into cloth. Her efforts were rewarded, for the result was an extraordinarily fine cloth that shone and shimmered in the light and was more beautiful than anything anyone had ever seen before. Leizu had her maids weave more of the cloth and dye it beautiful colors to make beautiful clothes for her and Huangdi to wear on special occasions. Everyone who saw them was amazed.

At first, only Leizu and Huangdi were allowed to wear clothing made from the silk cloth; there was only a limited amount of cloth available and the richness of the fabric seemed only suitable for nobility. Then, Leizu had another idea. She asked her husband to plant more mulberry trees and when she saw the leaves begin to disappear, she watched and waited as the silk worms grew fat and began to spin their cocoons once again. Over time, Leizu continued to expand her mulberry grove to produce more and more silkworms and slowly built a thriving silk industry. Originally, the entire production of silk, from cultivating the worms to weaving the cloth, was restricted to women. As a luxury product, it was deemed unimportant to the growth of China. Although silk had become more and more plentiful, the cloth itself was still so time consuming to make that only the very wealthy could afford it. Years later, when traders from the West came to China, they were awestruck by the luxurious cloth and were willing to pay very high prices to bring it back with them. As the precious silk cloth made its way to the Middle East, Egypt, and the Mediterranean, demand for the exotic fabric exploded and a lucrative trade route now known as the Silk Road was established to export silk to the west bringing gold, silver and wool to China. Silk, worth more than its weight in gold, became China’s most valuable export. From then on, the people of China called Leizu “The Empress of the Silkworm”, because they knew that the young woman who had discovered the small worm had helped them to build a majestic empire. 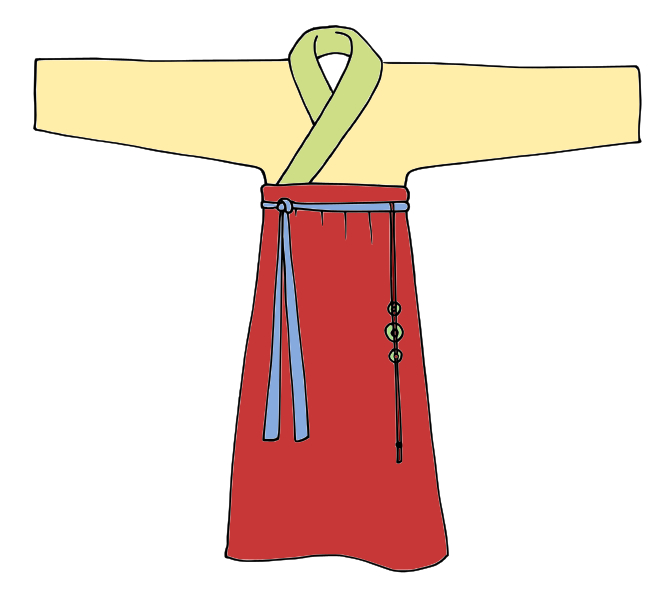 Leizu’s silk inspired her to create the Hanfu style of clothing; a traditional style that would be worn in China for more than 3000 years and influence the traditional dress in Vietnam, Korea, and Japan. The earliest form of Hanfu was composed of two main parts, a blouse or yi and a skirt or chang. The sleeves of the yi were narrow and the bodice crossed over the front, left over right, forming a “y” with the lapel. The chang wrapped around the yi at the waist. Both pieces were held in place with a sash that tied around the waist. Fabrics were generally dyed in warm colors, especially yellow, red, and brown, but cooler colors such as blue and green were also used. Early on, people from all social classes wore the same hanfu style, the only exception being that silk fabric was reserved for royalty. The style of Hanfu changed with each Dynasty. While new components, which carried significant meaning, were added or removed as a way to define the reigning Dynasty, the basic structure always remained the same. By the time of the Han Dynasty, which came 1400 years after Huangdi and Leizu, Hanfu had become a significant aspect of Chinese culture; styles separated classes of society, how it was worn demonstrated courteous refined behavior and etiquette, and Confucius considered it as a very important part of Chinese ceremony and ritual.

Want to make a Hanfu styled outfit for your doll?  Keep watching, the pattern is on the drawing board!

7 thoughts on “From Fig Leaves to High Fashion… Part 5, China”