Not long after the rise of the first civilizations in Sumer, other civilizations began popping up in Indus Valley, Egypt, Greece, China, and Meso America. All of these cultures were remarkably advanced and despite being widely scattered around the world, they maintained a surprising amount of contact with each other. Sumer was built between the Tigris and the Euphrates rivers in the land that the Ancient Greeks referred to as Mesopotamia, “the land between the rivers”. Rivers were the life blood of ancient civilizations in that they provided fresh water, fertile soil, and natural passageways for travel. Since there were no developed overland roads, rivers, seas, and oceans served as the main thoroughfares that not only spread civilizations throughout the ancient world, but also helped to keep them connected. 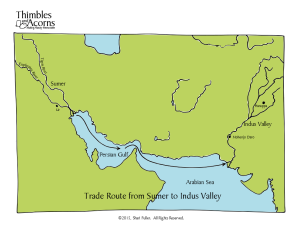 Traveling from Sumer out the mouth of the Tigris and Euphrates Rivers, a group of people sailed across the Persian Gulf and the Arabian Sea until they came upon the Indus River in what would later become northern India. There, they settled down and began building their own civilizations in the Indus Valley.  They discovered many natural resources and cultivated new crops that were unavailable in Sumer. One new crop not only changed the course of their civilization but also played a key role in the development of the world’s economy. The crop was cotton, and their skilled weavers learned how to turn it into a fine soft cloth unlike any the people of Sumer had seen before. It wasn’t long before the first long-distance trade began to take place between the two civilizations sparking an economic boom that made many people very wealthy very quickly satiating their appetites for elaborate jewelry, fine clothing, and exotic delicacies. Cities grew larger, people grew wealthier, and demand for specific goods created a need for skilled artisans in many new trades. While Indus Valley weavers became more adept at making exceptionally fine cotton cloth, dyers discovered new sources of pigments and techniques for dying cloth in vibrant colors and intricate patterns. Before long, trade networks crisscrossed the entire Eurasian continent and the demand for cotton grew quickly, ushering in a period of rapid growth that marked Indus Valley’s transition from a group of small loosely connected city-states with a common culture into one of the largest and most expansive civilizations of its day. 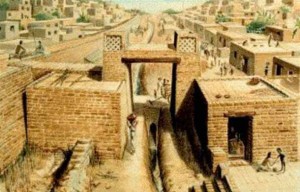 Gateway to the city of Harrappa.

The people of Indus Valley did not build massive monuments, or bury riches among their dead; they did not have any emperors or violent wars. They weren’t a perfect society in that they continued the dark practices of idol worship as they did in Sumer and employed a system of social division, but for the most part, Indus Valley was a peaceful civilization that devoted its time and resources into building a society dedicated to the common good of their people. With their advanced advanced architectural and construction techniques they built impressive dockyards, granaries, warehouses, and protective walls. The cities of Indus Valley were well organized and very sanitary. Settlements were built on giant platforms and elevated grounds to protect them from seasonal floods. On top of these foundations, networks of streets were laid out in neat patterns of straight lines and right angles. Brick buildings were built along the roads, all of which were equipped with bathing areas supplied with water from neighborhood wells. Each building was connected to covered drains that ran along the major streets, the world’s first sophisticated sewage system, that carried dirty water and sewage outside. Even the smallest houses on the edges of the towns were connected to these drains. Most city dwellers were traders or artisans who lived with others of the same occupation in well-defined neighborhoods. Order and cleanliness was of utmost importance.

The peace and sophistication of the Indus Valley civilizations allowed the people to thrive and prosper in a land that was rich in gold, silver, copper, turquoise, pearls, lapis lazuli, indigo, and cotton. Tradesmen used these natural resources with great skill, producing highly sought after trade goods such as beads, terracotta pots, jewelry, dye, and, most notably, cotton cloth. Cotton was not only a crop that was unique to their region, but the cloth they made was of extraordinary quality. What truly set it apart, however was how they dyed it. While natural dyes had been in common use from the very beginning of civilization, the color palette was limited to pale earthy tones. Dyers in Indus Valley, however, had learned how to extract a rich blue dye from the Indigo plant. Cotton and linen fabrics don’t readily absorb natural dyes, but Indigo had a natural mordant that not only produced a bright color but made it colorfast on cotton. After studying this pigment carefully, Indus Valley dyers eventually learned how to add mordants to other natural dyes to make them more vibrant and colorfast as well, greatly expanding the range and intensity of colored fabrics. With this knowledge, they also learned how to manipulated dyes so they could use blocks to print intricate designs on fabrics. Indus Valley artisans gained a reputation for their expertise in handling dyes and talent for creating beautiful designs on cotton their cotton cloth that would follow them into for the next four thousand years.

Indus Priest/King Statue. The statue is 17.5 cm high and carved from steatite a.k.a. soapstone. It was found in Mohenjo-daro in 1927. It is on display in the National Museum, Karachi, Pakistan. Note the similarity in their mode of dress. 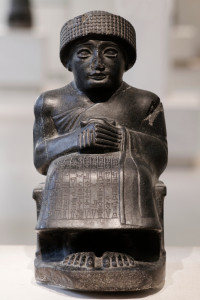 Given their close relationship with Sumeria, it isn’t surprising that the people of Indus Valley adopted a similar form of dress. To adapt to the warmer climate, however, the Indus Valley people made their shawls out of cotton instead of wool and wrapped them around their waist to create a knee length skirt. This mode of dress was worn by both men and women and would eventually evolve into the traditional Saree still worn by women in India today. Originally, women dressed in a Saree alone, but when the British took over India in the 1800s, they introduced a Victorian standard of modesty that inspired the addition of a fitted blouse and petticoat to their wardrobe.