This article is the first in a series to explore the development of clothing and fashion through the ages.  Beginning with Adam and Eve’s infamous fig leaves in the Garden of Eden we will examine what people wore in various ancient civilizations and see how cultures that seemed so disconnected actually had an enormous impact on one another.   What you are reading is part of a larger research project that I am putting together for a local home school group.  As this project comes together, look for special project pages, giveaways, and other free offers!  I hope you enjoy the journey, and please feel free to share your thoughts and comments as I pull my thoughts and ideas together into a cohesive theme.

According to the Old Testament, Adam and Eve created the first clothing when they sewed fig leaves together in a vain attempt to conceal their disobedience to God.  Until then, they had been covered by Gods glory, and walked with Him in the Garden of Eden naked and unashamed.  Their choice to sin separated them from God and His Glory, leaving them exposed, vulnerable, and mere shells of the people they were designed to be.  Staying in the Garden of Eden in their fallen state was out of the question, but God didn’t send them away without hope, he sent them away with a promise.  One day, He would lay down His own life to redeem mankind from their sin.  Before they left, God made the first sacrifice and dressed Adam and Eve in the skins of the slain animals to cover their shame.  This covering served as a reminder of His promise, and from that time on, people have had an innate need to cover themselves with clothing.

It was in the ancient land of Mesopotamia, nestled between the Tigris and Euphrates Rivers, that Sumeria, one of the very first civilizations, sprang forth and began to set the course for the world to come. Ur of the Chaldees was one of several city states that made up Sumeria, and it was here that Abram, the Biblical patriarch of the Israelites, was born. 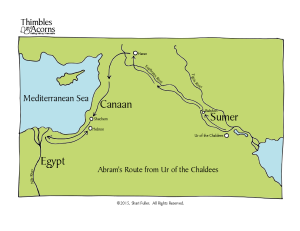 Map of Abram’s Route from Sumer, to Canaan, to Egypt, and back to Canaan.

Click Here For a Larger View of the Map

Like most Sumerians, Abram was a shepherd.  His wife’s name was Sarah, and like most Sumerian women, she probably spent a great deal of her time combing fleece from their sheep (shearing entire fleeces from sheep wouldn’t be done until later), spinning it into thread, and weaving it into cloth on a simple vertical loom. As you might well imagine, this was a time consuming process, which would probably explain why many the people depicted in statues and relief carvings continued to wear clothing fashioned from animal skins instead of cloth. Woven cloth was proving to be much more practical than animal skins however, and as women became more adept at weaving it, more and more people began to wear it. 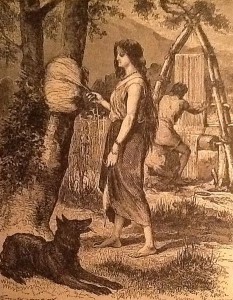 First Looms and the Manufacture of Cloth ~ James William Buel, 1886.

Clothing at this time was fashioned quite differently than it is today.  Instead of cutting and sewing pieces of cloth together to fit the body, clothing was fashioned from whole pieces of cloth. It wasn’t that the Sumerians couldn’t have figured out how to do this, in fact, they probably did more piecing together of garments when they used animal skins, it simply didn’t make sense to cut something apart that took so much effort to make. In a sense, wearing clothes that were pieced together probably seemed like a step backward to them. Men typically wore simple loincloths or short belted skirts as these were more practical for working in the fields or serving in the military.  However, at home and for more formal occasions, both men and women wore long shawls that they wrapped and draped around their bodies like a classy bath towel. These shawls often measured upwards of 9 feet in length.  Despite their simplicity, these shawls exuded a kind of elegance.  Sumerians who were more well-to-do often dyed their shawls with the natural dyes found in their local plants. Because wool absorbs natural dyes well, their shawls were probably made in a wide array of yellows, oranges, pinks, lavenders, and browns. Colors such as deep blues, reds, and purples, however, were more difficult to make and hard to come by so were restricted to the very wealthy. Other embellishments such as decorative fringes and tassels were also added to the edges of the shawls to add to their elegance. 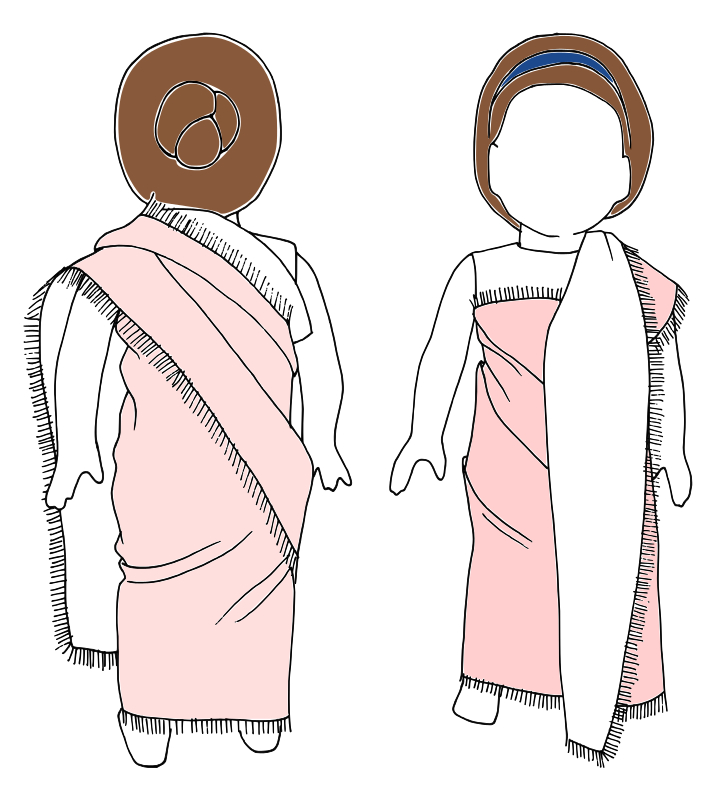 Click Here to go to the Sumerian Shawl Tutorial.

Learn about Woven Fabrics, How to Make a Fringed Hem, and Create an Ancient Sumerian Shawl for your doll.

In the next lessons, we will explore ancient India, Egypt, and Greece.  Later, we’ll get to Rome and check out what was going on in China as well.  The evolution of clothing is fascinating.  While each of these ancient civilizations begins with very similar styles, varying climates and ways of life quickly change the way each civilization dresses, creating a wide range of unique styles – styles that have the potential to make or break an empire.

30 thoughts on “From Fig Leaves to High Fashion… Lesson 1”