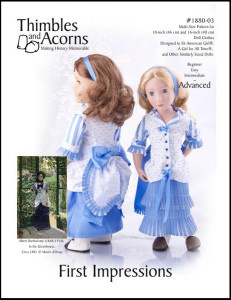 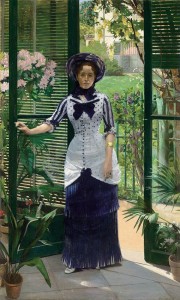 The introduction of synthetic dyes not only changed the look of fashion in the 19th century, but it also had a profound effect on the way painters viewed the world around them. As their palettes began to bloom with color, so did their paintings. In the 1860s ready mixed paints became available in tubes, liberating painters from having to mix their own paints and freeing them to take their paint boxes outside, en plein air, as the French would say, where they could paint the world as they saw. The style was more relaxed, using larger brush strokes, and the use of color was emphasized – shadows were created with complementary colors and black was forbidden. This new avante guard form of painting became known as Impressionism because it relied less on details and more on first impressions. The colors were bright, the style was bold, and the criticism was plentiful from those whose eyes were accustomed to the more sober colors of Academic painting. 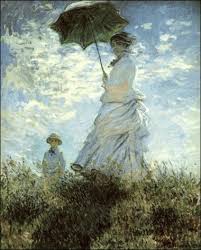 Albert Bartholomé (1848-1928), a French painter, joined the Impressionist movement in the 1870s. He and his wife Prospérie (1849-1887), known as Périe, daughter of the Marquis de Fleury, supported the Impressionist movement by hosting salons for their artistic circle of friends which included Edgar Degas, Mary Cassatt, Berthe Morisot, Claude Monet, Jacques-Emile Blanche, and Camille Pissaro. Jacques-Emile Blanche said of Périe that she “was so welcoming to commoners, bohemians, intellectuals and dinner guests alike, that evenings spent discussing

music, painting and books, and especially politics where Degas, a staunch nationalist, set the tone with an authority accepted by everyone (except Mary Cassatt, the free-spirited American artist), seemed to take place in a world apart, one unique to Paris”. Bartholomé presented a portrait of his wife at the 1881 Salon, entitled Dans le Serre (In the Conservatory). Two years later, he drew a pastel portrait showing her reading on the couch in front of a bookshelf. In 1885, Albert and Périe became the subject of a joint portrait by Edgar Degas, entitled The Conversation. This was a happy time in Albert

and Périe’s life. Unfortunately, Périe was in poor health and would die in 1887. Bartholomé was so overwhelmed with grief that he kept the dress that Périe wore in the Dans le Serre as a memorial. The grieving artist no longer had the heart to paint and took up sculpture on the advice of Degas. His first work as a sculptor was the poignant tomb for his wife (Bouillant Cemetery, Crépy-en-Valois). 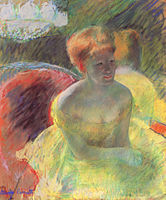 Lydia Leaning on Her Arms, Seated in Loge, Mary Cassatt, 1879.

Thanks to people like the Bartholomés, the public was able to view and critique the work of Impressionist painters. Though at first hostile to its unfinished, sketch-like appearance, the public gradually came to believe that the Impressionists had captured a fresh and original vision. Their work is recognized today for incorporating new technology to break free from established styles to depict everyday modern life.