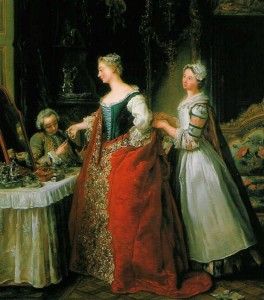 The distinct style of ladies dress in the 18th century was achieved by a complex succession of layers that began with the underpinnings. Underpinnings were what we might refer to as underwear today, and they

provided the basic structure and dimension, that made 18th century fashion unique. The name is somewhat deceptive however, because underpinnings weren’t always out of sight. They were simply the first layers of a complete outfit. In fact, for a working class girl, the underpinnings may have been all that she wore from day to day.

18th Century Underpinnings for A Girl for All Time Dolls.

Dressing always began with a soft linen shift. The shift was the most basic and practical piece in every girl’s wardrobe, whether a peasant or a queen. In the 18th century, even the most fashionable gowns and bodies were rarely washed. Shifts kept sweat and body oils from ruining her outer garments while protecting her skin from the caustic metal salts used to set the dyes in fashionable fabrics or the rough chaffing fibers in utilitarian fabrics. Shifts were generally very plain with a simple drawstring neckline – though sometimes the neckline and sleeves might be trimmed with lace if they were going to be exposed. Unlike the rest of her clothing, shifts were washed frequently and even the very poorest girl had at least two so she would have something to wear between washings. A lady didn’t wear anything underneath her shift because it as considered unhealthy not to allow herself to “air out”. Drawers were available, but did not become popular until the 19th century because they were regarded as being for prostitutes and women of loose morals only.

After donning her shift, a lady would put on her stockings and shoes before she put on her first petticoat. This was for practical purposes because at this point she could still bend in the middle. This first petticoat was a practical piece of clothing made out of utilitarian fabric. It gave her outer petticoats extra flounce and provided extra warmth in the colder seasons.

Stays were put on over her shift and first petticoat to give her torso a nice “V” shape, correct posture, and breast support. Working girls wore lightly boned stays which allowed them to move more freely whereas a fashionable lady wore heavily boned stays for the serious fit demanded by their fashionable gowns. Stays were considered so essential to a woman’s wardrobe that there were charity funds throughout England and the Colonies to provide them to poor women. The term “loose woman” was a reference to prostitutes who left their stays unbound, or women who were too poor to own them. To get the best possible fit, stays were laced up the back by another person, however, a girl could dress herself by lacing the stays loosely before putting them on and then tightening them by pulling them from behind.

With her shift, petticoat, and stays in place, a girl was considered dressed – that is, a working class girl would not be chastised for being indecently dressed if that was all she wore. Still, it was a mark of extreme poverty not to have at least one outer layer. 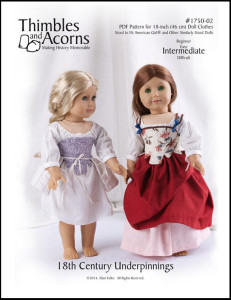 Before putting on her second petticoat, a lady would tie a pocket around her waist. 18th century pockets were the forerunners to todays purses and though they were worn underneath her clothing, they were often embroidered with very pretty designs. Around 1772, girls began drawing up their outer petticoats in a kind of a bustle. It was said that the fashion arose from maids who picked up the sides of their petticoats and tucked them into their pocket slit openings to enable them do their work more easily. The drawn up petticoats revealed their layers of petticoats which soon became the highly fashionable Polonaise style. As the fashion evolved, the bustles needed support to give them more shape. Panniers, basket like structures that rested on the hips, became a fashionable accessory that supported the Polonaise style bustles and widened the petticoats to better display elaborate gowns. Often, these panniers were made with a closed bottom so that they could be used as very large pockets – very large indeed!

The final piece in a ladies underpinnings was a second petticoat. Since this petticoat was more likely to be seen, it was usually made out of a finer fabric. Although cotton was becoming more popular, it was still very expensive. Linen, wool, or linsey-woolsey would have been a more common choice for such a use. Petticoats were worn a little above the ankles; covering the ankles for modesty’s sake was a 19th Century custom. Men and women of the 18th Century were vain about graceful limbs and clothing was often cut to reveal attractive wrists, ankles, and necks.

After all of that, a lady would be ready to put on her clothes!