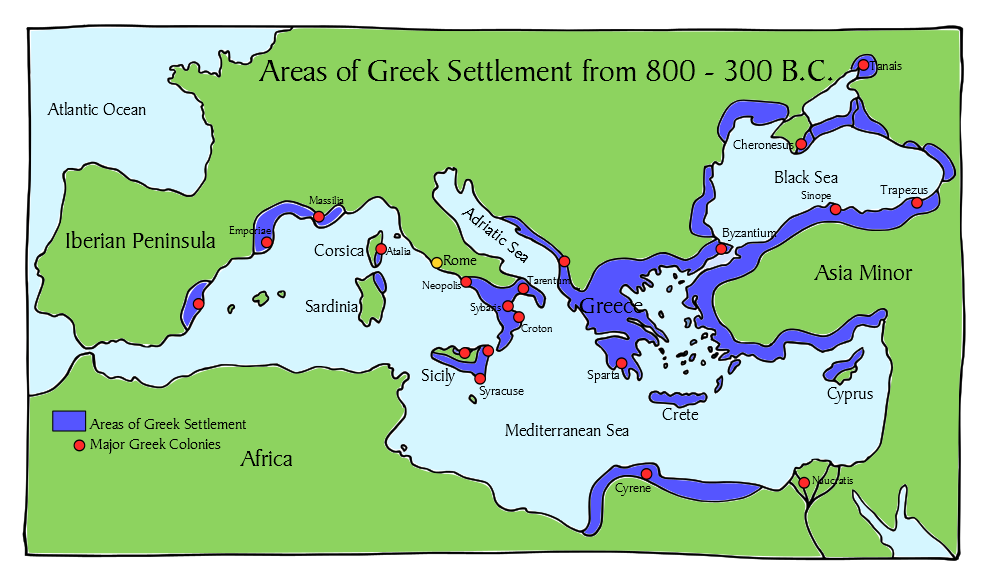 As Greece emerged from the dark age that followed the fall of the Mycenaean civilization, another civilization was being established along the coast of Italy. According to the legend, twin brothers named Romulus and Remus began building a city together. After arguing over who they should name the city after, Romulus won the honor by killing his brother and founded the city of Rome in 753 B.C. Greece established a number of colonies near the city of Rome and a brotherly relationship began to develop between the two civilizations. Rome looked up to Greece and adopted many of its ideas, gods, and modes of dress. Like brothers, however, there was a certain amount of rivalry and when Greece began to fall into decline in the 2nd century B.C., Rome didn’t hesitate to step in and take over. By this time, Rome had already conquered all of Italy and most of the North African coast. By 27 B.C. Rome had become and the largest empire in the history of the world, laying claim to most of the Middle East, Europe, and even the remote island of Britain. 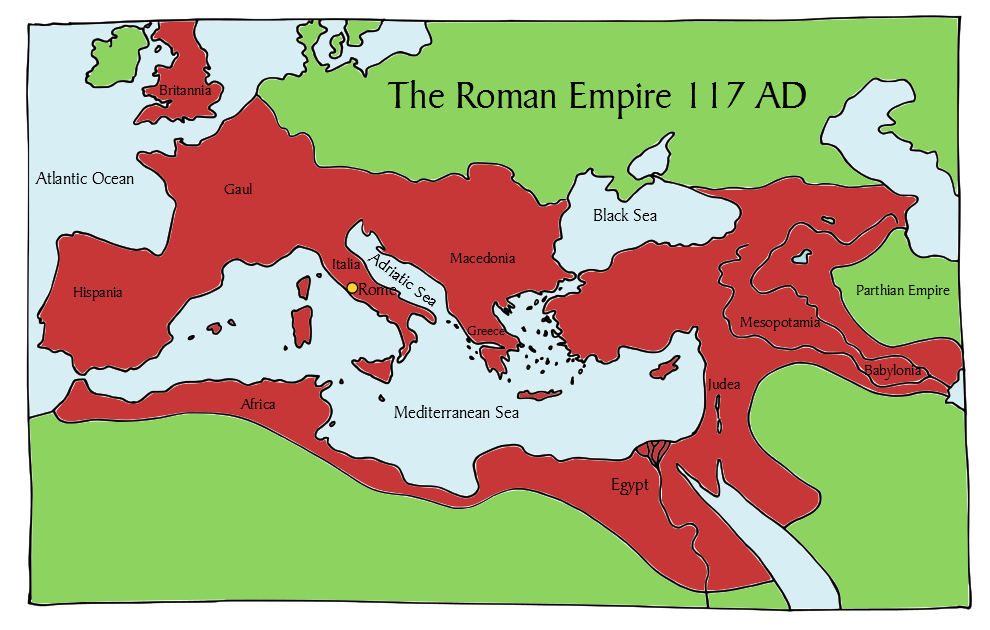 Once referred to as barbarians by the Greeks for their lack of refined culture and civilization, the Romans developed a complex dress code designed to reflect one’s social position, political rank, and gender. Although the Roman style of clothing remained very similar to that of the Greeks, Roman styles became more austere and dignified as they steered away from bright colors and sheer fabrics and leaned more toward modesty in how they draped and layered their clothing. In Rome, the basic garment worn by everyone was the tunic, similar to the Greek chiton. Both men and women wore sleeveless tunics, but tunics with sleeves were only worn by women. For slaves and laborers, a short tunic was all that they wore. For all other Roman citizens, a complete outfit of clothing consisted of an under tunic, an outer tunic and either a toga for men or a stola for women. Additional layers of tunics could be added as a protection against the cold. 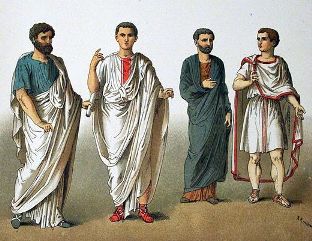 The toga, a large semicircle of cloth that could be draped in various ways, was worn only by the male citizens of Rome or women of ill repute. It was generally white, but the addition of a colored border was used to represent specific political ranks. A dark gray or brown toga was often worn during periods of mourning. Instead of a toga, women wore a stola, an ankle-length dress similar to the Greek peplos. When they went outside, women wore a long shawl, called a palla, over their stola.  Unlike men who were required to follow a strict dress code, women were free to dress as they pleased.

As the Romans expanded their empire into Europe and Asia – even sending military expeditions as far East as China in an effort to find the source of the mysterious silk fabric – they came into contact with many new civilizations that included the Celts, Visigoths, and Gauls from Europe and Western Asia. All of these civilizations were very different from any the Romans had known before and the Romans quickly denounced their language, their way of life, and their mode of dress as utterly
barbaric. Because of the colder climate, many of the northern civilizations adopted a type of trouser that the Romans called braccae or feminalia. It was a strange article of clothing to the Romans and was disdained by Roman Legionaries who considered them to be – effeminate. Over the course of time (or perhaps over the course of a winter), Roman Legionaries grudgingly began adopting trousers despite the prejudice attached to them. These trousers were usually dark red in color, fastened with a drawstring, and varied in length from just above the knee to the ankles. Although trousers had gained acceptance in northern outposts, they remained an unacceptable form of attire in the more civilized Roman provinces. 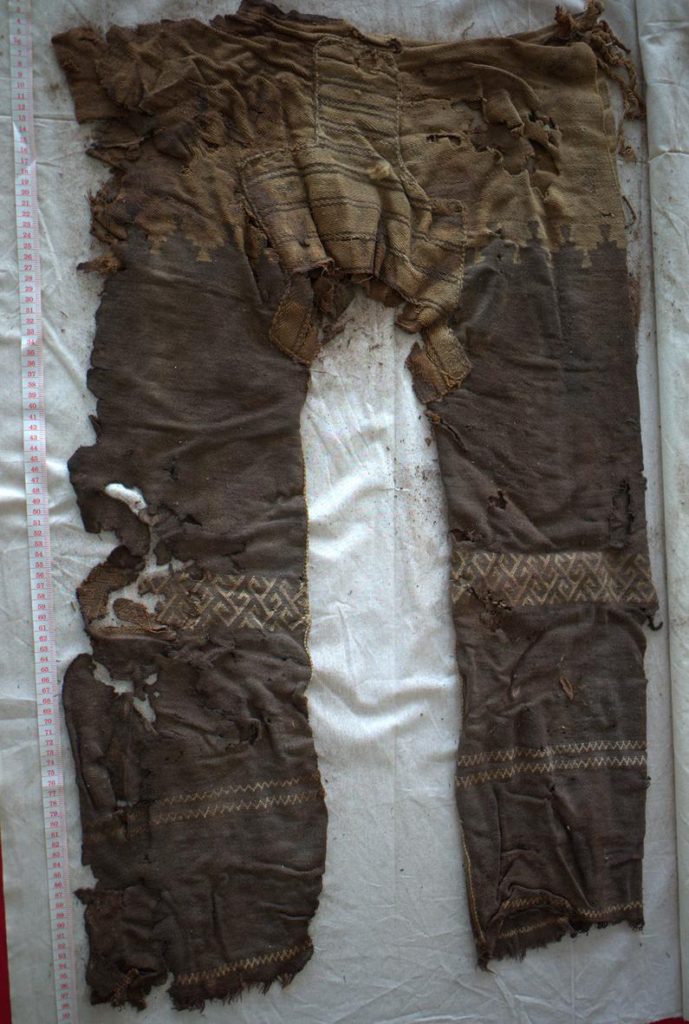 The oldest known trousers were found in China and date back to about 1200 B.C. They had straight legs and wide crotches and were fastened with drawstrings in the waistband. Each piece was individually woven to the proper shape and size from wool so that the finished cloth didn’t need to be cut.

Around 400 A.D., the Roman Emperor Honorious issued a decree prohibiting men from wearing “barbarian” trousers in Rome.  To bolster the decree, Roman monuments depicted prisoners of war in trousers as a sign of their subjection. This ended up being a big mistake. Unbeknownst to Honorious, a large army of trouser-clad Huns from Central Asia had begun to make their way west. Centuries 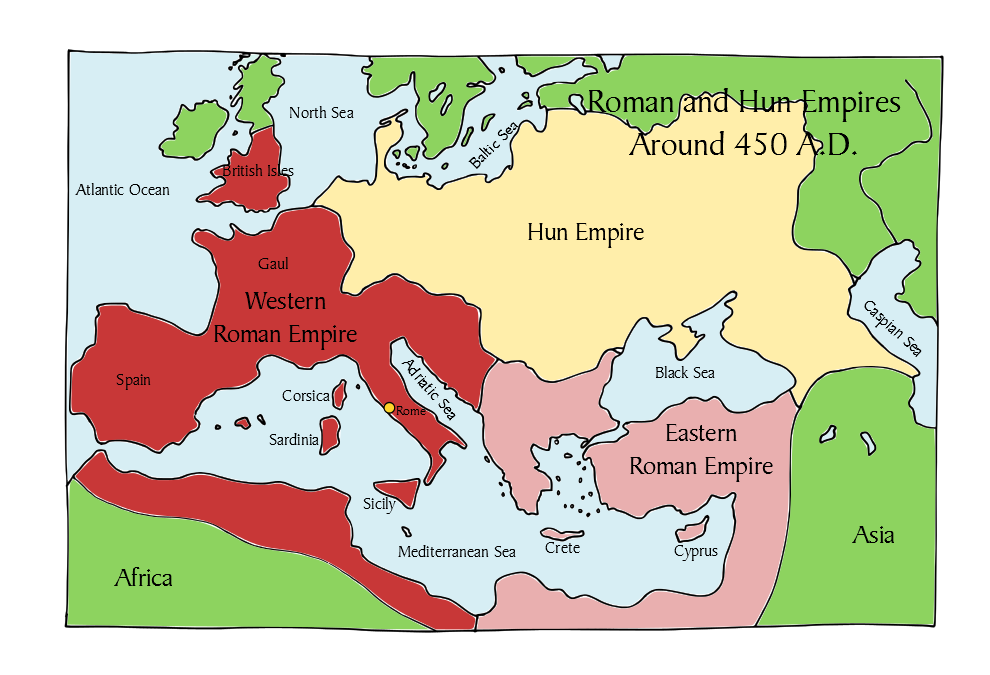 earlier, the Huns traded their robes for trousers and mastered the art of mounted warfare. Trousers provided these horsemen the protection they needed to ride astride a horse and allowed them to become extremely quick and agile in battle.  The Roman Empire was no match for the trouser-clad Huns whose formidable cavalry systematically began to tear the empire apart. By the time the Roman Empire fell in 476 A.D., trousers had become a symbol of power and strength and were adopted as a clothing of choice by men throughout Europe. Trousers were strictly for men, however, and it wouldn’t be until the advent of World War II in the 1930s that trousers would become acceptable for women to wear.

The Roman Empire had stood for over 400 years, and though it fell, it would continue to influence the World just as Greece had. It’s principles and ideals, paired with it’s acceptance of Christianity would serve to unite Europe, despite deep underlying differences, for centuries to come.