Skip to content
Home » Giving Back » Dolls for a Cause

Dolls for a Cause

Dolls for a Cause is a group of women brought together through their love of sewing, crafting, and dolls and who, also, want to use that love as a way to help people, even if it is only in a small way. Dolls for a Cause started in 2011 when Dacia of Mini Me Dolly Diva’s found a pair of Pink Ribbon socks and used them to make a pair of American Girl size socks. She realized, of course, that they needed more, so she created the first Fight Like a Girl outfit. 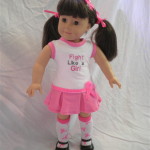 She didn’t feel right about profiting from it so she decided to auction the outfit on EBay and donate 100% of the proceeds to the Komen organization for breast cancer research and cure. The following year, Dacia created another Breast Cancer outfit that included donations from other doll crafters and more money was raised for the charity. 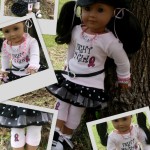 In April of 2013, Amy of Lemonhead103 began working with Dacia to spear head an auction for Autism Awareness and even more items were donated. 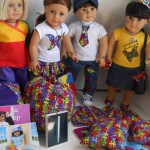 As more people expressed an interest in being a part of the auctions and more donations came in, the ladies needed a way to organize it all. An official name and Facebook group was then created in August 2013. This core group of ladies, which can be found on the Dolls for a Cause Facebook page, continues to create collections for various charities. 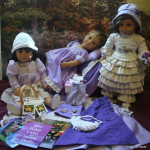 Each collection is unique with a different theme to make it more personal to that charity or just to have some fun and creativity. A new auction runs on eBay every couple months giving the ladies time in between to create each new collection. In addition to the core members of Dolls for a Cause, various doll pattern makers and doll clothing designers often donate items to the collections, so one never know what treasures will be found in any of the Dolls for a Cause auctions. The next collection will be to honor those in the Armed Forces. The auction will run in June and the collection will include Military heroes as well as some Super Hero inspired outfit for a little fun. 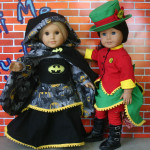 3 thoughts on “Dolls for a Cause”