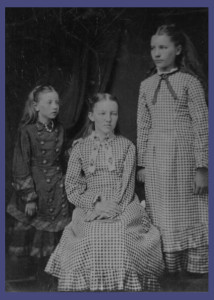 As Mary and Laura Ingalls enjoyed their earliest adventures together, their little sister, “Baby Carrie”, watched them from Ma’s lap in a quiet obscurity. It wasn’t until Mary’s blindness completely changed the family dynamics that a timid and shy Carrie was drawn out of the background. As Laura’s role suddenly shifted from the little sister to the big sister, a warm and tender relationship developed between her and Carrie, in the stories and in real life, as Laura protects and mentor’s her through her formative years.
As a child, Carrie was small, thin, and frail, and the deprivations of the Long Winter of 1880-81 were particularly difficult on her. Still, she was determined to follow in the footsteps of her older sister Laura. When Mary first became blind, 9-year-old Carrie eagerly volunteered to take on Laura’s chores at home, so that Laura could work and study to become a teacher to help earn money to send Mary to the College for the Blind in Iowa. When Laura married, Carrie quickly picked up where her sister had left off and studied hard to become a school teacher just like Laura so she too could help Mary continue her education. Teaching wasn’t really what she wanted to do, however, and when she was nineteen-years-old, she became an apprentice at the Leader, the town’s weekly newspaper. Though she was never particularly robust, the pioneer spirit was deep within her, much like her older sister, and when she was thirty-five, she set off on her own to Boulder, Colorado and Wyoming in search of a more comfortable climate. 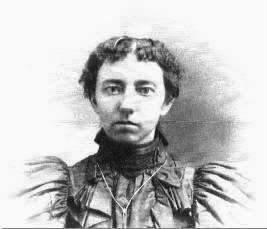 Colorado and Wyoming weren’t home, however, and before long she made her way back to South Dakota. She took a homestead near the town of Topbar and then moved to Keystone where she managed the Keystone Recorder. While in Keystone, Carrie met David N. Swanzey, a widower with two young children. David was an early gold prospector who came to Keystone in the 1890s, staked out a placer claim along Grizzly Creek, and took part in naming a rocky outcrop Mt. Rushmore after Charles Rushmore, a New York City lawyer. Little did he know how famous that granite peak would become. Carrie and David married on August 1, 1912. Carrie, now 41, retired from the newspaper to raise David’s children, Harold age 6 and Mary age 8, as her own. The family lived in Keystone near Mount Rushmore and when Gutzon Borglum arrived in the area looking for a good site for the carving, David was one of the group of men who recommended the mountain and led the sculptor to it. Carrie’s stepson Harold helped with the carving and his name can be found on the granite walls below the monument. 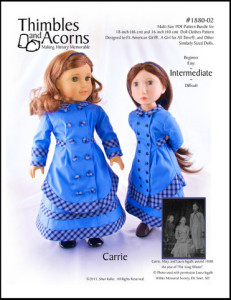 When Ma Ingalls passed away in 1924, Mary came to live with Carrie until she passed away in 1928. It was during this time that Laura began writing “Little House in the Big Woods”. Carrie, an enthusiastic supporter of her sister Laura’s efforts, helped by sharing memories of their childhood.