Having been born and raised in Northern Minnesota, I am quite familiar with the wiles of winter. Snow, ice, and blizzards are simply a matter of course. Modern conveniences such as central heating and the national weather service have tamed winter to the degree that most storms are little more than an inconvenience and in some cases a refreshing change of routine. Since blizzards can be predicted days in advance, there is usually plenty of time to prepare, so when a storm hits it’s just a matter of turning up the heat, making a hot cup of cocoa, and curling up with a good book. From the comfort of our modern homes, blowing snow can be as mesmerizing as a warm campfire, but to the 19th century homesteader on the Dakota prairie, winter storms were anything but relaxing. Flimsy shanty walls were a poor barricade against the driving wind, scouring snow, and frigid temperatures. There was no central heat that could be turned up at the flick of a switch. Small stoves that needed to be continually fed wood, coal, or, in desperate circumstances, twisted hay, could never drive the cold completely out of the house. Blizzards struck with little warning and the risk of getting lost on the open prairie was a very real and imminent danger.

While studying our family tree, my husband and I discovered that his great great grandparents, George and Amanda Orrock, in the spring of 1880 claimed a homestead in Dakota Territory, just 80 miles northeast of Charles and Caroline Ingalls homestead in De Smet, South Dakota. This was the same summer that Laura helped her Pa put up hay in her book “The Long Winter”, a book that has always been my favorite of the Little House series. This new connection made the story deeply personal as we discovered how closely George and Amanda’s lives paralleled the lives of Charles and Caroline.

Married in 1871, George and Amanda began their life together among their extended families in Orrock, Minnesota, about 160 miles northwest of the Ingalls in Walnut Grove. This was a particularly difficult time for farmers in the Midwest. Post-war inflation, failed railroad speculations, and successive crop failures brought on by drought and grasshopper plagues were all contributing factors to the Panic of 1873 that ushered in a worldwide depression. Charles Ingalls was all too familiar with the hardship brought on by this depression; grasshopper plagues had devastated his crops from 1873 to 1877 and it was becoming increasingly difficult to support his family on their Walnut Grove farm. Although George and Amanda were spared the grasshoppers, they couldn’t escape the depression. George was a farmer and financial troubles made it impossible for him to come up with the hard cash he needed to purchase a farm to support his growing family. By 1878, however, things began looking brighter; the grasshoppers were gone, the drought had passed, homesteads were opening up in Dakota Territory, and the railroad companies began making their way west once again. The success of the railroads depended on homesteaders settling along their routes, and so began a campaign offering free land and inexpensive travel to all those willing to take a chance. The lure of free land was an opportunity that neither Charles Ingalls nor George Orrock could resist. In 1879, Charles sold their Walnut Grove farm and took a job with the Chicago and North Western Railway to fund their move to Dakota Territory. Although the homestead offices would not be opened until the following year, Charles was able to scope out his choice of land and be among the first to file a claim in the the new town of De Smet in the spring of 1880. That same spring, George and Amanda packed up their four young children and followed the “Milwaukee Road”, a stretch of railroad built by the Chicago, Milwaukee, St. Paul and Pacific Railroad, to Grant County, just 100 miles northwest of De Smet. 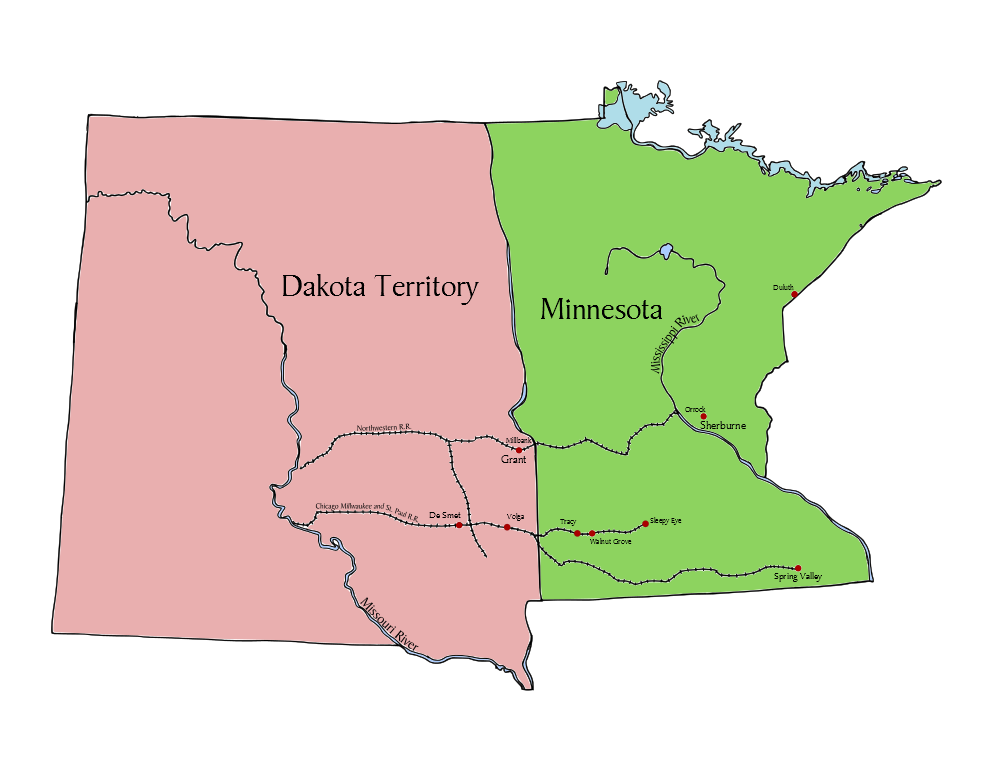 Although homestead land was free, it by no means came without cost or risk. Desperate for land, it was easy for homesteaders to forget the Native Americans who had been driven off to open it up, and once a claim was taken, homesteaders had just five years to tame their piece of the unpredictable wild prairies – failure to do so meant their farm would be forfeit and all their hard work lost. Still, it was a price desperate farmers and businessmen were more than willing to pay. Towns quickly sprang up along the newly laid railroads during the summer of 1880. As this was the first year for many of the new homesteaders, most of their efforts were put into building flimsy claim shanties and breaking the tough sod to prepare it for the next year’s crops. Because the first harvests were small, most 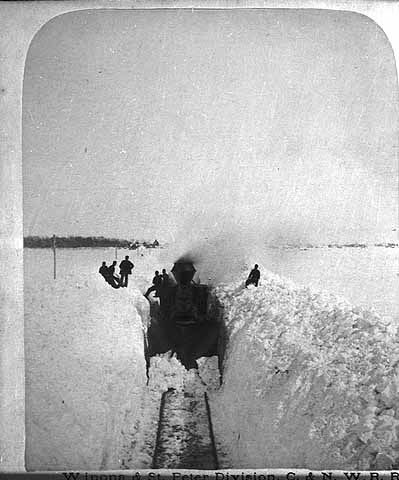 A Chicago and North Western Railway “woodburner” pulling out of Sleepy Eye after the great blizzard. 3/22/1881

settlers were depending on the railroads to bring in most of their winter supplies.  Unfortunately, winter arrived unexpectedly and in full force on October 15, ahead of the supply trains, dumping several feet of snow over the entire Midwest. Trains were stopped and homesteaders were left stranded, ill-prepared for the long hard winter that lay ahead. Storm after storm pelted the prairie throughout the winter, keeping the trains buried in packed snow and ice until spring. The endurance and innovation of the settlers was stretched to the limit as they were forced to find ways to make it through the winter on their own. As food and coal ran out, seed grain that had been meant to sow their fields the next year was ground in coffee grinders for food, hay was twisted into large knots to burn in place of coal, and families sheltered together to save on fuel and combine their resources. The unprecedented winter was the ultimate test of the resilience of the pioneer spirit in each of the homesteaders. When spring finally came, many gave up their homesteads, packed their belongings, and left their dreams of free land behind. Charles Ingalls and George Orrock, however, remained steadfast and both eventually proved their claims.

The winter of 1880 – 1881 was exceptionally severe and would have been a formidable experience even with today’s modern conveniences. Cut off from the rest of the world on the newly settled Dakota Territory without adequate food, shelter, or transportation, the intense isolation, bitter cold, tremendous amounts of snow, and severe hunger described in “The Long Winter” was not a unique experience to the Ingalls family. Diaries, newspaper articles, and other historical records tell us that the effect of this winter was felt throughout the United States and even into Europe. Take a look into your own family tree and you just may find a family member that had their own unique experience during the winter of 1880 – 1881.

7 thoughts on “A Long Winter”