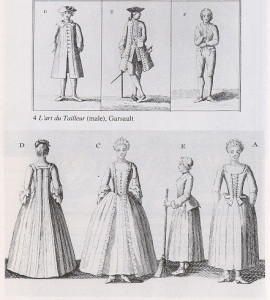 Classes were easily identified through dress and the Sumptuary Laws helped maintain the distinction between nobility and the social climbing bourgeoisie.

Keeping up with the latest fashion trends has become such a way of life that it is hard to imagine a time when dressing fashionably was a privilege reserved for clergy, noble aristocrats,  and royalty alone.  Sumptuary laws, some of which date back to the Roman Empire,  existed in almost every culture to some degree or another (and still exist in many cultures today) as a means to distinguish social classes and to regulate the balance of trade by limiting the market for expensive imported goods.  Specific clothing styles, colors, and embellishments were reserved for each social class and dressing outside a social class could result in public discipline or the forfeiture of land or title.  Despite constant regulation, however, these laws were almost impossible to enforce.

Until the middle ages, the wealth of the nations was in the hands of the nobles.   All commoners were poor and controlled by the nobles who owned the land they lived off.  However, as trade and industry began to grow, commoners found ways to build wealth for themselves giving rise to the middle class.  In France, this middle class came to be known as the bourgeoisie and because they generally supported the throne in its own struggle against the feudal order, they became a powerful influence that  spearheaded the progress of industry, science, and  social change.  Title and not wealth is what gave one special privileges however, and dressing in fashionable clothing was a privilege for people of title only.  Naturally, this didn’t sit well with the bourgeoisie who had worked hard for their money without being able to enjoy the benefits of their labor… especially, when they saw so many nobles who disdained the very idea of work and looked down on those whose labor financed their extravagant lifestyles.  By the 17th century, the bourgeoisie was supporting principles of natural rights and constitutional government against the theories of divine right and privilege of the sovereign and the nobility.  It was members of the bourgeoisie that led the English Revolution in the 17th century and the American and French revolutions in the late 18th century which helped to establish political rights and personal liberty for all free men.

The same level of care in construction was used on 18th century fashion dolls as it would have been used on the life-sized ensembles.

As the lines between the nobility and bourgeoisie became more blurred, Sumptuary laws became increasingly difficult to enforce.  Nobility began dressing more and more elaborately in an effort to distinguish themselves from the social climbing bourgeoisie.   In reaction, the bourgeoisie began scrambling more and more to keep up with the latest fashions themselves.  Fashion designers were high in demand, miniature fashion dolls were distributed, and colorful fashion publications were published in an effort to keep the public aware of the latest styles.  The activity not only began to influence the dress of the lower classes, but the dress of the lower classes also began to influence the the design of the highest fashions.  For instance, the Polonaise dress was inspired by milk maids who tucked up their skirts to keep them out of the way while they worked.    Simple fichus, neckerchiefs originally worn by lower class women to cover the low cut necklines of the dresses that they had received as cast offs were at first scoffed at by the nobles as prudish only to later be dressed up and adopted as a decorative accessory.  By the middle of the 18th century, fashion had become big business in France and the young Marie Antoinette and her dressmaker Rose Bertin succeeded in setting trends would cross all social classes and establish Paris as the fashion center of the world.

The reaction to Marie Antoinette’s Chemise a la Reine was similar to the reaction we would get today if the First Lady were to show up at a press conference in her underwear.

Though Marie Antoinette’s penchant for fashionable clothing was hardly the cause of the many issues in France’s growing economic crisis, she became the prime target for an angry populace.  Taxes were continually being squeezed from a nearly destitute populace to fund the exorbitant lifestyles of the nobles and the political conquests of the government.  To add insult to injury, while the peasants starved, wigs powdered with wheat flour became the height of fashion.  The success of the American Revolution increased the rumblings of liberty and equality in France and aristocrats became targets for the angry and vengeful masses.  High fashion suddenly became a stigma no one wanted wear.  Poor Marie, in her attempt to move away from high court fashion, she over-corrected with her introduction of the Chemise a la Reine, and found herself in middle of yet another controversy by appearing in a state of undress unbecoming to a monarch.  Despite the outcry against Marie, it caught on as simple, light, and loose clothing not only became the mark of liberty and equality but also allowed aristocrats to blend in with the rest of the populace as public opinion reached a dangerous level.   Still, it was too little too late.  To make matters worse, as the wealthy quit buying fashionable fabrics, local fabric mills went out of business leaving many unemployed workers as a result. There was, it seemed, no good way out.

When the French Revolution finally broke out, one of the first acts was to revoke the Sumptuary laws.  With the restrictions broken, high fashion relaxed and the concept of fashionable dress became a mark of success rather than station.

2 thoughts on “A Fashionable Revolution”