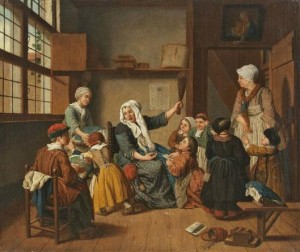 The elaborate fashions that define 18th style are certainly a sight to behold, and I never tire of studying their every detail, however, they were far from practical for daily life in the 18th century; they are far from 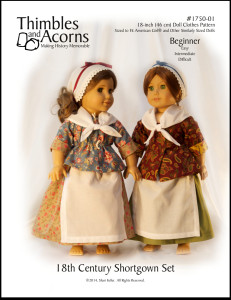 practical for daily life in the 21st century.  Fabric was expensive and the complicated styles of fashionable gowns had to be made by trained seamstresses, making them far too pricey for the average woman to own. That was just as well, since the average woman would have found it rather difficult to raise her large family, tend her small farm, and help her husband with his trade while wearing a fancy gown.  Much like today, women chose simpler more comfortable clothing that suited their daily life.

The mid-18th century saw the emergence of what we now refer to as the shortgown, a casual jacket like garment that seems to have developed from the longer bedgown worn earlier in the century. It was generally cut out of one piece of fabric and then fitted to the body with pleats, drawstrings, or a combination of the two. They required minimal sewing skills, for contrary to popular thought, not every woman from this time period was an adept seamstress. Shortgowns were usually fastened in the front with pins or drawstrings, not buttons, and an apron tied on over it helped to keep it shut. Designed for comfort and economy, shortgowns were usually made from fabrics such as wool, linen, or linsey woolsy, which was a combination of the two fibers. Still, just like today, women desired to look their best and tried to incorporate the elements of the latest fashions into their daily wardrobe.  More well-to-do women used hand printed cotton, an expensive luxury fabric at the time, and dressed up their shortgowns with extra pleats, cuffs, and trims to make them more elegant. Comfortable, and economical, shortgowns were the denim shirts of the day – workhorses with a touch of class. 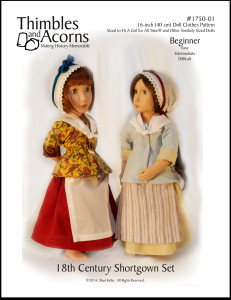 Pattern also available to fit A Girl for All Time dolls.

From the example set by his parents, Benjamin Franklin learned the value of hard work.  Though for a time, he lived the life of a prodigal son, he never forsook the lessons of frugality, industry, and common sense he had learned from his parents.  Through shear perseverance, he read, learned, saved, and invested, raising himself from a common laborer to a gentleman who was honored and respected by the working class and nobility.  While he certainly enjoyed the benefits of his success, however, he was never ashamed of the hard work and frugality that brought it to him.  From 1732 to 1758, he published his immensely popular Poor Richard’s Almanack, which offered a mixture of seasonal weather forecasts, practical household hints, puzzles, and witty phrases that have lived on in the contemporary American vernacular. Scattered throughout the 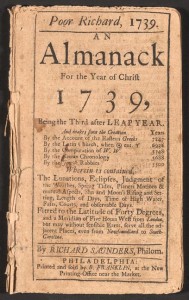 pages, Franklin extoled the virtues of industry, economy, and prudence. A successful life, he believed, was not one of leisure and idleness; leisure was time for doing something useful. He warned against too many friovlous fripperies, and praised simplicity. The elegant gowns of the 18th century certainly had their place, but it was the work done while wearing the simple frocks that made it possible to enjoy them. 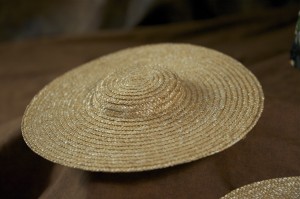 There is only one more thing that our shortgown ensemble needs to give it a nice finishing touch… that’s a classic wide brimmed straw hat.