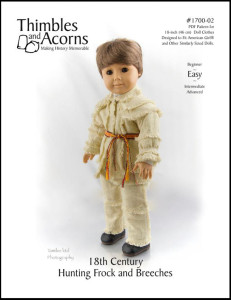 Make your own Hunting Frock! Click Here to see the pattern at PixieFaire.

By the 1700s, European colonists in America began making their way across the Blue Ridge Mountains, stretching from Pennsylvania through North Carolina, where they began forging respectful, albeit tenuous, relationships with the Native American population. Isolated from the eastern colonies in what became known as the backcountry, this blend of English, Scots-Irish, Germanic, African, and Native Americans fostered a new and distinctly American culture. It was in the backcountry of North Carolina that Daniel Boone, the greatest icon of the American frontier, made his home in the 1750s. Like many other settlers in the area, Boone supported his family as a hunter and trapper, collecting hides and pelts for the European market. “Red” or summer deerskins were in enormous demand around the world as leather breeches, which had become popular for the working class and slaves because of their durability, were becoming increasingly fashionable among young gentleman wanting to dress the part of country squires. Hunters, needing a light summer garment to wear while hunting, developed a cheap and easy to make hunting frock. The unique design was made out of cheap linen or deerskin and combined the lightness and protection of the European work smock, the cape and accessible front opening of the Greatcoat, and the decorative fringe of the Eastern Woodland Tribes. The front of the smock overlapped and was held in place with a sash or a belt, forming a sort of pocket which hunters used to carry their food and other supplies. Variations of this frock, worn by both Europeans and Native Americans alike, were Daniel Boone’s clothing of choice. Combined with a pair of fringed breeches, a pair of moccasins, and a wide brimmed – not the coonskin cap that became popular in the 1950s as he thought those types of caps were uncivilized – he style became his trademark. The Hunting Frock remained a regional garment until the 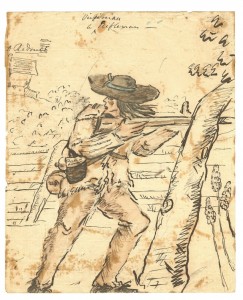 A watercolor image of a Virginia Rifleman during the Philadelphia Campaign

outbreak of the French and Indian War when Boone and other backcountry boys volunteered for the North Carolina militia, introducing the military to their uniquely distinguished and practical mode of dress. In 1755 George Washington and Daniel Boone both served General Braddock; George as his senior American Aide and Boone as a wagoner. Washington was struck by the practical style of the hunting frock worn by Boone and when the American Revolution broke out twenty years later, he persuaded the Continental Congress to adopt the hunting frock as the first uniform of the American Army. A writer from Middlesex County noted: “The sound of war echoes from north to south. Every plain is full of armed men, who all wear a hunting shirt, on the left breast of which are sewed, in very legible letters, Liberty or Death.” While Washington led the fight on the Eastern front and Boone fought on the western 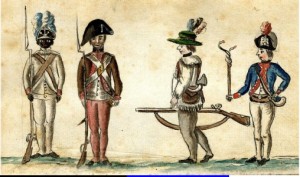 front under George Rogers Clark, hunting frocks made their way out of the backcountry to become the emblem of American liberty and independence. The hunting frock remained as a symbol of American independence through the War of 1812. When the British attacked the American frigate Chesapeake on June 22,1807, President Thomas Jefferson authorized the establishment of the United States Rifle Regiments. Once again, the regiments adopted the hunting frock as their uniform, but this time it was made of a durable linen duck called Russia sheeting, dyed green, and adorned with yellow fringe. However, after the War of 1812, the hunting frock quickly saw its demise as a viable uniform since a garment, made chiefly from linen, does not withstand heavy military service. From 1815 onward, the United States Army began clothing its troops in more durable wool uniforms. As the decades passed, the memory of the once prolific symbol of American Independence faded into the background, however, along with Daniel Boone it remained an iconic symbol of the American frontiersman.