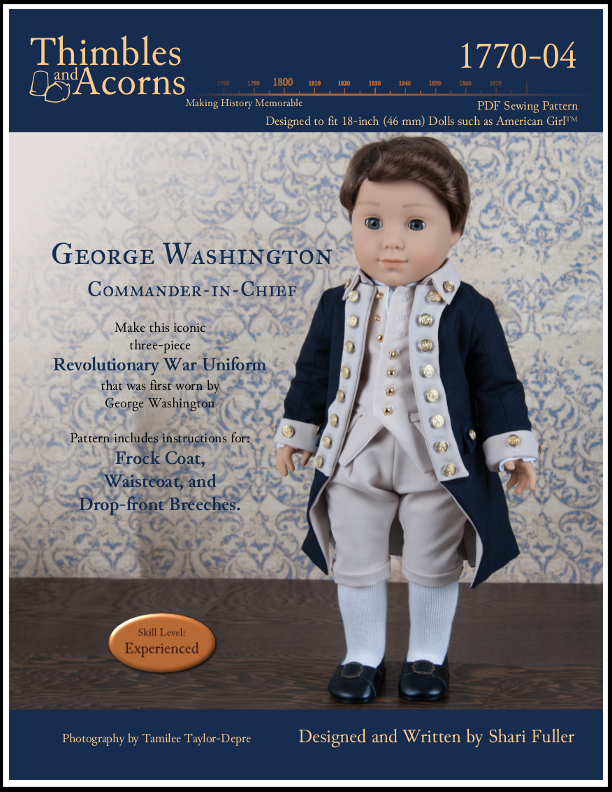 On May 10, 1775, George Washington attended the Second Continental Congress in Philadelphia dressed in a snappy blue and buff uniform that had been adopted by Virginia’s militia. The colors were not chosen by mere whim or fancy but because they were the longstanding Whig colors of England. Unlike the Torys, the Whigs had regularly shown support for the colonists in Parliament so the colonists felt politically aligned with them. Fighting had already broken out the month before with the Battles of Lexington and Concord, and the mood in Philadelphia was angry and defiant. Washington spoke little in congress. He didn’t need to; the blue and buff uniform he wore said all he needed to say. He was prepared for war. On June 14, 1775, Congress created the Continental Army, and Washington was unanimously elected as General and Commander-in-Chief. Little did Washington realize that this uniform would remain part of his wardrobe for the rest of his life.

This pattern is a faithful reproduction of George Washington’s iconic three-piece uniform. It includes a fully lined long frock coat with fashionable curved lapels, functional pockets, split and pleated back, and button-down collar. The waistcoat has two functional pockets and is fitted in the back with ties or lacing. Traditional drop-front knee-length breeches complete this historic ensemble.